You had one job! South Africa’s President Ramaphosa hilariously struggles to put coronavirus face mask on while demonstrating how to wear them

South Africa President Cyril Ramaphosa was captured struggling to get his facemask on after delivering a speech on the importance of wearing them, in a blunder livestreamed yesterday.

Before suffering the face mask mishap President Ramaphosa annouced that the nation would be easing some of their lockdown restrictions from next month.

He urged those leaving their homes to travel on public transport to wear face masks, and then attempted to give an instructive demonstration on how to wear a mask – which did not go to plan.

Scroll down for video. 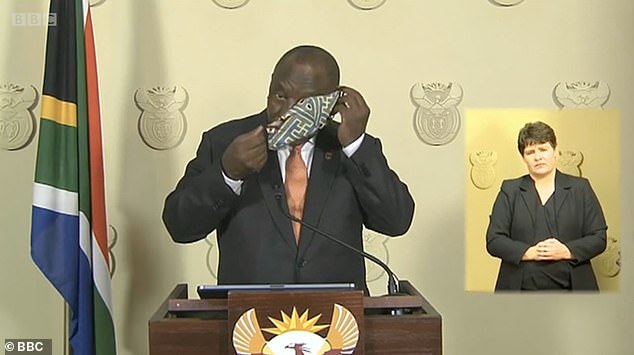 Leading by example the president stretches the fabric mask around one of his ears, but struggles to hook the other ear in the elastic.

A second later the mask rebels, pinging off his face before President Ramaphosa firmly places it back over his ears, this time leaving his eyes covered by the mask like a blindfold.

Twitter humourously reacted to the video clip of the president grappling with the mask which was shared widely on social media.

Using the hashtags #MaskOnChallenge and #CyrilMaskChallenge people shared posts of themselves incorrectly wearing face masks over their eyes.

Today the president responded to the social media reaction, telling Enca: ‘Well for those of you who were laughing at me yesterday, I am going to open a TV channel where i’m going to teach poeple to put on a mask. So you can enroll how a mask is put on.’ 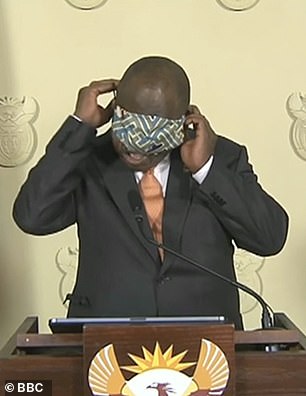 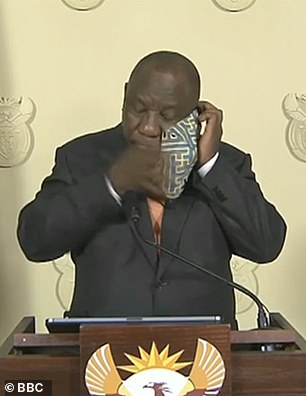 The president stretched the elastic of a fabric mask around one of his ears, but struggled to hook the other ear, leaving his eyes covered by the mask 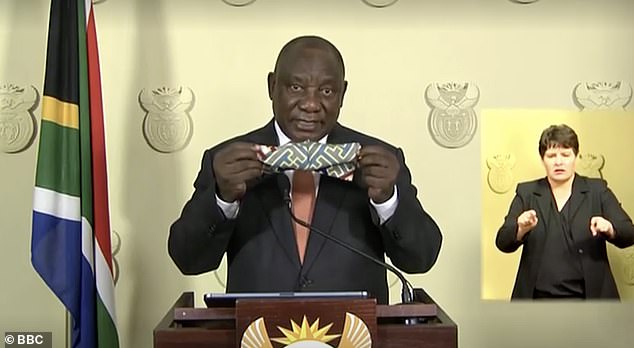 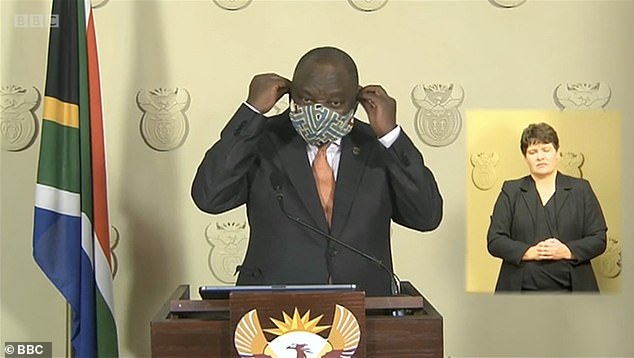 He secures the mask without touching his face, which is the advised way to put on a mask according to Professor of infectious diseases Marc Mendelson at the University of Cape town

One Twitter user posted: ‘My family and I laughed. Even the sign language lady was a bit more passionate throughout the whole speech and suddenly at the end she ran out of signs.

Adding: ‘I don’t think Mr President will mind a little #MaskOnChallenge We have more than enough sulk moments. Let’s laugh a little.’

While Roxanne Konkol tweeted: ‘Something positive. Thanks Cyril for the giggles #maskchallenge #MaskOnChallenge #Masks #CyrilFridays.’

Others did not find the jokes about the mask blunder amusing, Busisiwe Ntshingila tweeted: ‘Not funny not after all we have been through can you imagine how tired that man must be, where many failed he has protected us, give him a break n show some respect.’