Sweden sees new surge in coronavirus cases with 613 more infections, up from 482 yesterday

Sweden has seen a renewed spike in coronavirus cases today after another 613 people tested positive.

The 613 new cases mark the biggest jump for seven days and the third-largest since the crisis began, taking Sweden’s total from 11,927 to 12,540.

Sweden is continuing to hold out against a national lockdown despite growing criticism and calls for ‘rapid and radical measures’ to contain the outbreak. 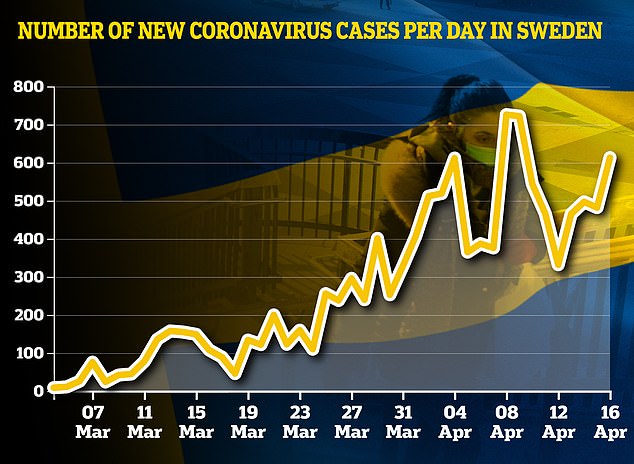 This chart shows the daily number of cases recorded in Sweden. Today’s figure of 613 was a sharp increase from yesterday’s 482 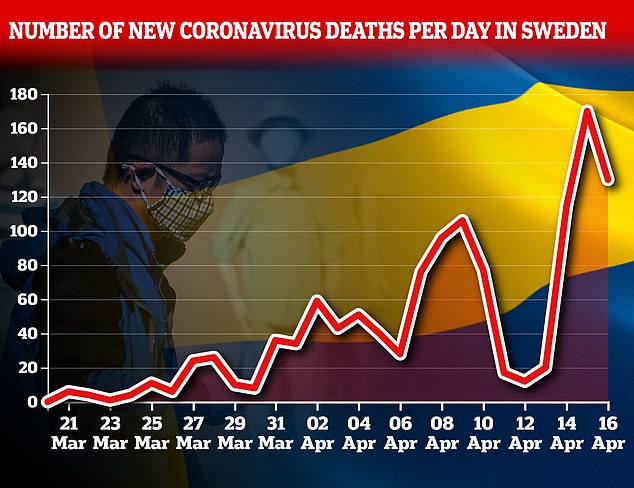 This graph shows the daily number of deaths. Only a handful were recorded over the Easter weekend, prompting a spike when those days were properly accounted for

Yesterday’s higher figures were partly attributable to an Easter weekend backlog, but today’s numbers appear to represent a genuine jump in new infections.

The 613 new cases reported today are the highest 24-hour jump since 722 new infections were added to the tally a week ago.

The 5.1 per cent increase is also the highest since last week, at a time when many countries are seeing their infection rates slow down.

Sweden’s public health agency says 565 cases were reported on the calendar day of Wednesday, up from 440 on Tuesday and 420 on Monday.

The agency says more than 5,000 of Sweden’s 12,540 cases area in the Stockholm region, with 214 new cases confirmed there yesterday.

Bars and restaurants are still open in Sweden along with primary schools, and public gatherings of 50 people are still permissible.

Shops are also open, and the government has emphasised taking ‘personal responsibility’ for social distancing rather than enforcing it.

‘In the current situation, people in Sweden are on the whole acting responsibly to reduce the spread of infection by, for example, restricting their social contacts.

‘This crisis may continue for a long time, and in order for the measures to work over time, people need to understand and accept them.’ 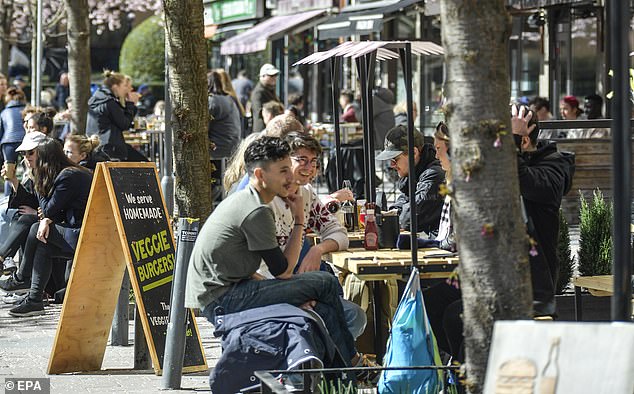 Young people sit around a table in central Stockholm over the Easter weekend. The number of reported deaths has risen sharply since very low figures were released at the weekend 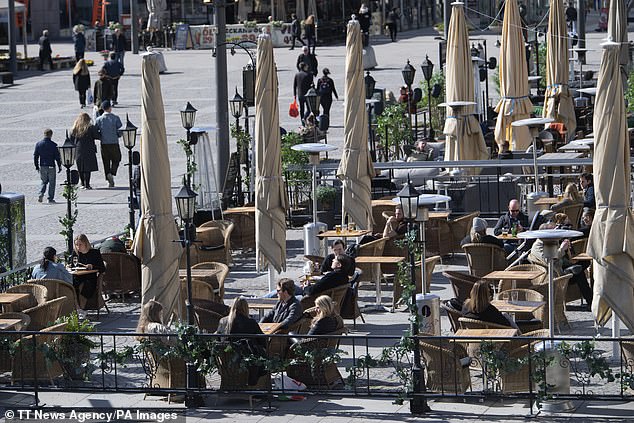 People sit outdoors in Stockholm at the weekend, with Swedish authorities still holding out against imposing a lockdown

However, the government has faced growing criticism as its death rate leaps ahead of that in Finland, Denmark and Norway.

‘The authorities and the government stupidly did not believe that the epidemic would reach Sweden at all,’ claimed Bo Lundback, professor of epidemiology at the University of Gothenburg.

Lundback and 21 other researchers urged the government to reconsider and institute ‘rapid and radical measures’ in a joint newspaper article on Tuesday.

‘Sweden was poorly or even not at all prepared,’ Lundback said.

Last week, health officials announced 40 percent of deaths in the Stockholm region – the epicentre of the epidemic – could be traced to retirement and care homes.

Even with measures targeting these institutions, half of the retirement homes in the capital have had cases of the virus.

The government has had trouble explaining the outbreaks.

‘We still don’t quite know the reason, but there aren’t too many things to choose from,’ Health Minister Lena Hallengren said earlier this month.

‘Either the ban on visits hasn’t been enforced or staff with symptoms, or that didn’t think they had symptoms, have gone to work,’ she wrote.

Sweden has also vowed to spend more than 100billion kronor (£8billion) to address the economic impact of the pandemic.

Despite the lack of a lockdown, the Swedish economy is expected to shrink by around four per cent this year.