Hardline union bosses are bringing the teaching profession ‘into disrepute’ by opposing the reopening of all schools next month, a former Government education adviser claimed last night.

Nine organisations representing most teachers and headteachers in England have united to brand plans to reopen primary and secondary schools from March 8 ‘reckless’.

Instead of the so-called ‘big bang’ opening being pushed by Boris Johnson, they want a slower, phased return of pupils to the classroom.

After a string of Government U-turns during the pandemic, union leaders are said to be increasingly confident that they can force Mr Johnson and Education Secretary Gavin Williamson to back down.

But last night, Chris McGovern, a former headteacher and education policy adviser to Margaret Thatcher, accused the unions of attempting to ‘bully’ the Government and warned that their stance risked causing huge damage to children’s education.

He said: ‘The recklessness is coming from the unions. They are playing political games with children’s futures and with the country.

‘The unions are seeking reasons for keeping schools closed. What they should be looking for are ways of saving this generation of children. It’s an appalling indictment of the union bosses and the heads. They are bringing the profession into disrepute.’

Last week, The Mail on Sunday revealed a video of militant teachers from the Left-wing National Education Union boasting of using threats of strike action to keep classrooms closed.

Government officials fear teachers will refuse to go into work because it is unsafe, citing the 1996 Employment Rights Act – a tactic used last year. Leading education expert Professor Alan Smithers said last night it was the ‘instinct’ of unions to oppose measures put forward by Mr Johnson’s Government, adding: ‘I am sure they are hearing from their members it’s a good aim [to reopen schools]. But I think it is also the instinct of the unions to find difficulties, because it is a Conservative Government, rather than say, “Let’s get on with this, it’s desperately needed”.’

Prof Smithers, director of the Centre for Education and Employment Research at the University of Buckingham, urged teachers to return to school.

‘For Heaven’s sake let’s get on with real life again and give our young people the best education we possibly can in this very disrupted year.’ The nine organisations representing teachers, heads, governors and support staff signed a statement urging Mr Johnson to open schools on March 8 ‘only if the scientific evidence is absolutely clear that this is safe’ and even then ‘to go no further than a phased return of children’.

Kevin Courtney, joint general secretary of the National Education Union, said that on current trends there was likely to be one infected person for every 300 by March 8 – 4.5 times higher than when schools returned last September.

He added: ‘If we really want to make sure this is the last lockdown, then it is clearly the most sensible course to proceed with caution – a phased approach like in Wales, Northern Ireland and Scotland – opening slowly and checking what happens to the infection figures.’

Scott Pughsley, a teacher in Preston, last night likened the reopening of all schools next month to ‘pouring petrol on the smouldering embers of a fire to make it go boom and keep burning’. 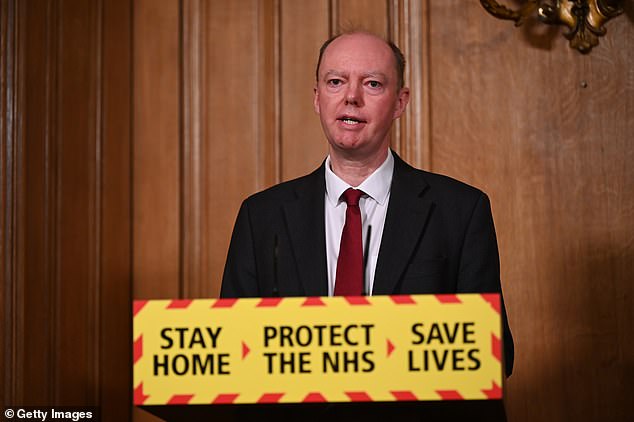 The Guardian newspaper had reported that Professor Whitty had been reluctant to put his name to a public show of support this week for Boris Johnson’s ‘big bang’ plan for schools – a claim flatly rejected by a No 10 insider.

Education sources were reported to have told the newspaper that Prof Whitty was ‘very unhappy’ with proposals for all ten million children and staff to return to schools in England on March 8. But the Department of Health insisted the Chief Medical Officer had no reservations about the plan, while sources close to the Prime Minister also dismissed rumours of tension over the move.

A Downing Street source said advice given by members of the Scientific Advisory Group for Emergencies – on which Prof Whitty sits – over the Prime Minister’s plans for lifting lockdown conditions would be published ‘after the event’.

The source added: ‘The Prime Minister is determined to get schools back. He wants pupils to be back, and the Department for Education are working on a plan for how we do that safely.’