TENERIFE has been "shaken and rattled" by a magnitude 4 earthquake in the sea which was felt by tourists on the island.

Tremors were recorded from Puerto de la Cruz in the north to the popular resorts of Los Cristianos and Playa de las Americas in the south. 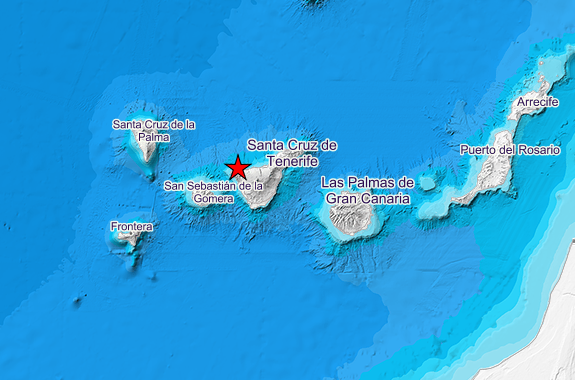 The quake was registered in the sea off the coast of Buenavista del Norte at 8.53pm last night and was even detected on the nearby island of La Gomera. Experts said it was about 20 miles deep.

"I was preparing dinner at home when the kitchen table shook for a few seconds," Raquel González, deputy mayor of the nearby town of Los Silos told Spanish newspaper El Dia.Similar

It is one of the largest quakes recorded in the history of Tenerife since seismic records became available in 1964 when the National Geographic Institute (IGN) placed the first station on the island.

Seismic experts have assured there is no cause for concern and Tenerife remains a very safe place to visit.

The emergency services said there had been no reports of any injuries.

No personal or material damage has been reported.

"People in Tenerife also took to the social networks to report kitchen furniture shaking, windows vibrating, cups smashing on the floor and "houses moving for about two seconds.

"Reports also flooded in to the earthquake monitoring sites, including Volcano Discovery which confirmed the quake had been a magnitude of four at 8.53pm.

Brits posted messages, including: "About three seconds duration, just before local firework display started. Shook our sofa and rattled bottles. The same was felt by our neighbours."

Another said: "The chair I was sitting on shook for two to three seconds" whilst another posted: "It felt like a gas explosion on the road."

Other comments included: "Sitting in armchair and felt as though someone was pushing against it. Heard noise outside like heavy traffic."

Thesun.co.uk is your go to destination for the best celebrity news, football news, real-life stories, jaw-dropping pictures and must-see video.