A TERRIFYING video shows a car of masked men chasing and repeatedly ramming into a BMW in residential city streets.

The group recklessly career through busy roads, before coming to a halt and rushing out of the car to smash up the BMW. 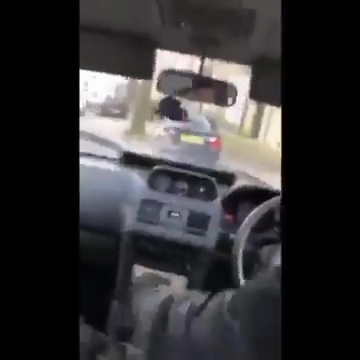 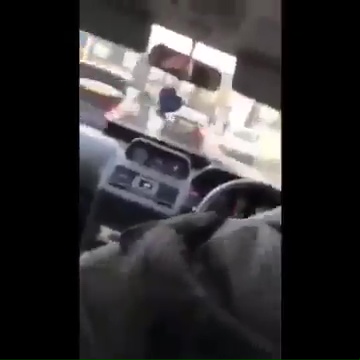 The clip, filmed in what appears to be Bradford, West Yorkshire, shows masked men telling the driver to “f*****g ram him” as tyres screech and music blares loudly.

At the start of the video, taken by a passenger, the car turns a corner and appears to surprise the black BMW.

Men are heard shouting “ram him” as the BMW driver reverses and tries to get away.

As the two cars hurtle through the streets with thumping rap music in the background, a passenger shouts: “Ram his back end!”

The BMW driver tries to evade the pursuing car, and tyres are heard shrieking as they turn tight corners.

At the end of the clip, the car narrowly avoids colliding with other vehicles parked on the tight residential roads.

Eventually, the BMW comes to a halt, and the car slams into the back of it.

The front passenger passes what looks like a black object to the driver, and another gets out of the car with what appears to be an object with a wooden handle.

In the final seconds, the group surround the BMW and crashing noises are heard as they hit it repeatedly.

The video was shared on Facebook by a group called Bradford Uk Plate Spotter, and has been viewed over 150,000 times.

Viewers were shocked at the terrifying video, with one social media user commenting: “You put the lives of others at risk by your actions and are no better than the bloke you’re chasing. It’s not GTA. It’s reality.”

Another said: “No wonder the jails are full with clowns filming their own crimes.” 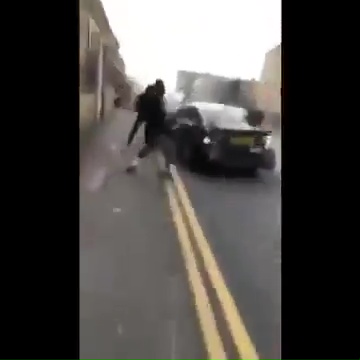