Maryland police arrested a Tesla driver last week for allegedly hitting a crossing guard with his car before fleeing the scene – but video from a neighbor’s security camera seems to call those charges into question.

The incident happened Thursday morning in Glen Burnie, a suburb south of Baltimore. A female crossing guard with the Anne Arundel County Police stopped traffic so three students could cross the street.

Police said an “impatient” driver in a blue Tesla assaulted the crossing guard by driving his vehicle toward her, “intentionally striking her leg, causing a minor injury.” 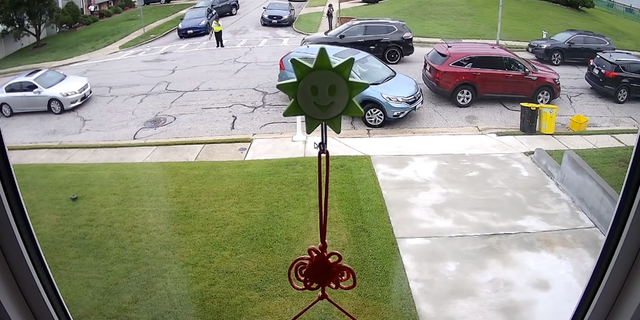 Security camera footage capturing the interaction between the crossing guard and the blue Tesla.
(Howard Wang )

The driver, whom they identified as 32-year-old Joseph Hernandez, then fled the scene, police said. A nearby officer noted the driver’s license plate and Hernandez was arrested.

Hernandez was put in handcuffs in front of his girlfriend and her child before he was taken to jail, WJLA reported. He is charged with failure to render aid to an injured person, reckless driving, and negligent driving as well as second-degree assault.

Hernandez has said all the charges against him are completely false – and footage from a neighbor’s security camera seems to back him up.

It shows Hernandez pull up to a crosswalk in the blue Tesla. The crossing guard gestures for him to move up so another car can pass. She appears to back into his car while motioning for three students to cross the street.

Hernandez inches the car backward and it appears that he and the crossing guard exchange words. He drives away and the security guard appears unharmed.

Police told Fox News they are aware of the video and are investigating.