The banks offering ZERO interest: Millions of savers miss out

The banks offering ZERO interest: Millions of savers miss out with more than 200 accounts now offering only 0.01% – so where SHOULD you put your money?

Millions are facing almost no returns on their savings as hundreds of banks offer virtually zero interest and the national base rate threatens to dip into the negative.

More than 200 High Street banks, including giants like HSBC, have a mere 0.01 per cent interest rate, meaning customers who invest £10,000 will only claw in £1.

These wafer thin returns could be slashed even more if the Bank of England drags the base rate below zero.

Governor Andrew Bailey yesterday paved the way for negative rates when he told MPs yesterday it would be ‘foolish’ to rule out the move to rescue the UK’s flagging economy.

Negative rates would charge retail banks to hold money with the Bank of England, giving them little wriggle room to offer their own customers generous returns.

Rates are already at their lowest on record, and thousands of customers with Vernon Building Society are earning no interest at all on their savings.

But it was little cheer to hordes of savers who expressed dismay at how little return they were making. 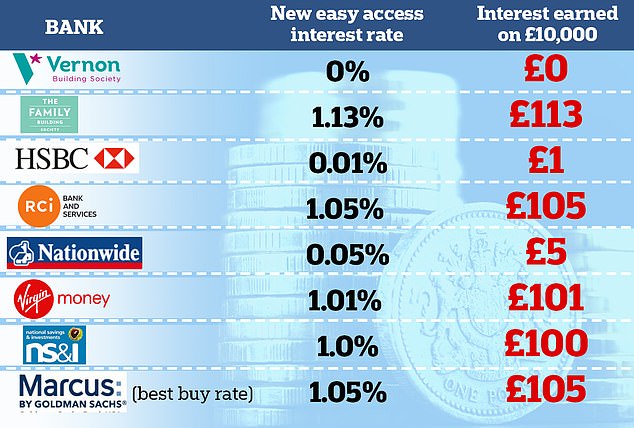 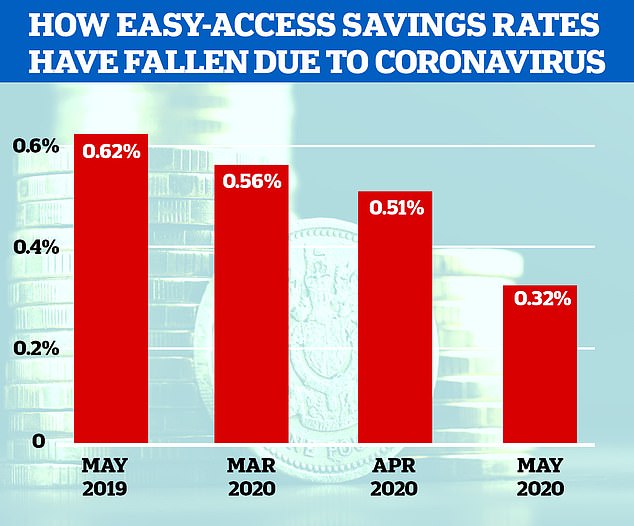 This graph shows how average easy-access accounts paid 0.62 per cent last May – but a year on, it has nearly halved, with the average account paying just 0.32 per cent

Those who hold money in Vernon Building Society’s instant access account, which was cut from 0.05 per cent interest to 0 per cent at the start of May, are earning £105 less interest a year on £10,000 of savings than they could be with the top easy-access accounts around.

That best buy rate of 1.13 per cent is offered by small Surrey-based building society Family BS, while the best rate from a big bank is 1.05 per cent from Marcus by Goldman Sachs and RCI Bank, the banking arm of Renault.

Those accounts are followed by Virgin Money with 1.01 per cent and then National Savings & Investment with 1 per cent. But even these top rates have crumbled in recent months.

Six accounts currently pay savers nothing at all, but apart from Vernon Building Society’s account, which was recently cut, they also all paid this rate this time last year.

One is an account with private bank, Weatherbys, while the others from Family BS, Melton BS and Yorkshire BS, are linked to offset mortgages, where savers only pay interest on the balance between deposits and their outstanding home loan.

The millions of savers who leave their money languishing in old accounts offered by the UK’s biggest banks, the AA, Citibank and the Post Office will earn little more than nothing, as they pay just 0.01 per cent interest, or £1 on £10,000 of savings.

But even banks offering the most generous interest rates could be forced to make cuts.

Rachel Springall, from Moneyfacts, told the Guardian: ‘The most flexible savings accounts could face further cuts should base rate move any lower or if savings providers decide they want to deter deposits.’

Since the Bank of England announced two cuts to its base rate in eight days in March, which took it to its lowest-ever rate of 0.1 per cent, savings rates have fallen.

If the Bank cut interest rates below zero, which Governor Andrew Bailey told MPs yesterday he was not ruling out, things would get even worse for savers.

This is because Britain’s banks would be charged money to hold it with the central bank, a move they would almost certainly pass onto already hard-pressed savers.

The average easy-access account paid 0.62 per cent last May, according to data from Moneyfacts.

A year on, it has nearly halved, with the average account paying just 0.32 per cent, while the amount you can earn from the best-paying savings account falling 0.45 percentage points.

The biggest reason for such a collapse, with the average rate falling from 0.51 per cent to 0.32 per cent between April and May alone, has been a raft of savings rate cuts from the UK’s biggest banks.

Already paying little interest to savers, they took the opportunity of the base rate cut to slash savings rates even further.

But by July, the UK’s six big high street names will have made 110 cuts to savings accounts announced since the Bank of England’s decisions that will take the rate paid on them to just 0.01 per cent, according to analyst Savings Champion.

Many of those cuts were already made throughout late April and early May, with 235 on-sale and closed accounts paying just 0.01 per cent, Savings Champion said.

While the best easy-access accounts currently pay 1.05 per cent, or £104 more a year in interest on £10,000 in savings than a standard easy-access offer from a major high street bank, there is concern that rates could fall below 1 per cent.

Such has been the shock to the savings market caused by the coronavirus that top-paying accounts from as little as six months ago are already having their rates cut, something which doesn’t usually happen for at least a year.

One savings boss of a bank which frequently features near the top of This is Money’s best buy tables said the current state of the savings market was ‘unprecedented’.

Will this be another lost decade for savers?

Savers fear they are staring down the barrel of another lost decade after the coronavirus crisis led the Bank of England to slash rates to 0.1 per cent, writes This is Money editor Simon Lambert.

They have already witnessed ten years of paltry returns on their cash in the wake of the financial crisis and are forecast to face many more years of he same.

Why did the Bank of England cut rates?

Two swift and brutal cuts in the space of less than a fortnight in March took the base rate down from an already lowly 0.75 per cent to 0.1 per cent.

The base rate, or Bank Rate to use the official name, is the benchmark interest rate of the Bank of England.

It is the rate that the Bank of England pays to commercial banks that hold money with it and heavily influences the rates at which those banks are willing to lend or pay interest.

The Bank’s Monetary Policy Committee uses the rate to target inflation of 2 per cent and ‘support the Government’s other economic aims for growth and employment’.

Cutting Bank Rate lowers the cost of borrowing money for people and businesses and theoretically this should increase the demand for it – stimulating the economy.

As the coronavirus crisis hit and Britain faced lockdown – all but pausing the consumer economy –  a big cut was deemed necessary. 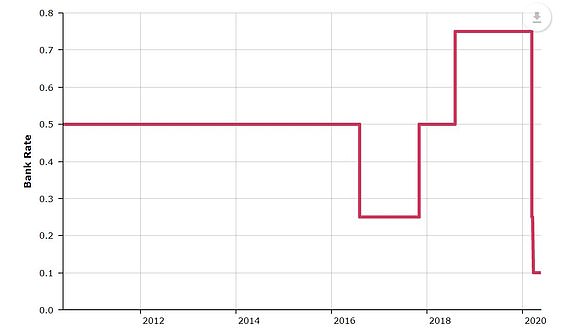 Even after the financial crisis the bank of England base rate was only cut to 0.5%. It then dropped to 0.25% after the Brexit vote, before briefly climbing and then being slashed to a new record low of 0.1% to combat the coronavirus crash

How low had base rate fallen before this?

During the financial crisis, the base rate was cut to an historic low of 0.5 per cent, in March 2009.

In 2009, there were expectations that the emergency cut to 0.5 per cent would not be long-lasting and rates would get back to a new normal of about 3 per cent.

How long will rates stay this low?

The immense economic hit from coronavirus was outlined by the Bank of England recently, when it said it expected a 14 per cent drop in GDP this year and the worst recession since 1706.

The Government has massively expanded its borrowing and spending for coronavirus rescue plans for individuals and businesses and is funding this with an emergency overdraft from the Bank of England and the sale of UK government bonds, known as gilts.

In a sign of the pessimism over the economy and indication of how long rates are expected to stay low, investors bought UK bonds at a negative yield in a gilt auction yesterday.

The Bank of England has also delivered a further round of quantitative easing, dubbed money-printing, to the tune of £200billion.

All of this points to savers facing many more years of low returns, as base rate is held down to help the economy and banks get cheap funding from the Bank of England, reducing their need for savings deposits. 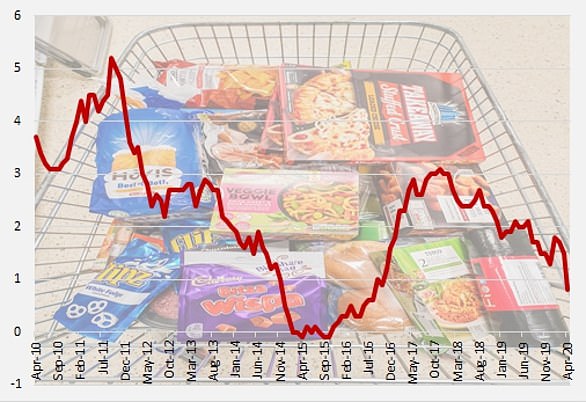 The ONS revealed yesterday that the inflation rate had crashed to just 0.8% in April

Could inflation return and rates rise?

At the moment, the coronavirus crash and lockdowns are deflationary and the UK’s consumer prices inflation figure dived from 1.5 per cent in March to 0.8 per cent in April.

The Bank of England sees the hit to the economy as being so bad that cutting rates, doing an extra £200 billion round of quantitative easing, and the Government handing out money to individuals – through furlough schemes – and to businesses – through grants and emergency loans – will not be inflationary.

Some economists and analysts argue, however, that because this involves a wave of money going directly into the economy, rather than into the financial system as it did after the financial crisis, it could lead to an inflation spike.

If inflation does return, the Bank is likely to go easy on it and be reluctant to raise rates quickly.

Britain’s big mortgages and sizeable personal debt pile mean that raising rates would spell problems for people’s finances, while low rates and a bit of inflation suit the Government as they would slowly erode away the value of the UK’s debt.