The judge called it an infatuation. That’s how it was for Cromer High School sports teacher Chris Dawson: from the time he started taking the 16-year-old schoolgirl for sport; through the evenings she babysat his children and slept overnight in his family home; when he invited her into his bed – and most of all when he faced the prospect of losing her.

That was when he needed his wife Lynette out of the way. 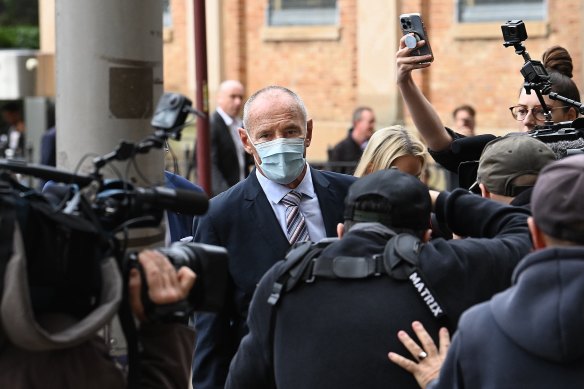 Chris Dawson arrives at court as a free man for the last time before the guilty verdict was delivered.Credit:Kate Geraghty

So he made a decision – and that’s how it was for the next 40 years. He married the schoolgirl and they had a child together before getting divorced. There was a police investigation into Lynette’s disappearance that went nowhere, two inquests that went nowhere and he started a new life in Queensland. The story was that Lynette had walked out.

But now, all of a sudden, on Tuesday Dawson is standing, white-faced, as a judge finds him guilty of murder and two sheriffs are leading him through a security door into custody and helicopters are flying overhead and people are clapping in the overflow courtroom and a woman at the back of the room is softly weeping.

The wheels of justice move achingly slow, but once they gather pace, they can spin into a blur.

“I’m a little bit emotional,” Lynette’s brother, Greg Simms, said outside the court. “We’ve always said that she wouldn’t have left those two children … There are no bones about that at all.”

Lynette’s family and friends came to the court dressed in pink, which was her favourite colour, and her niece handed out home-baked biscuits to the big crowd during the lunch break, as she had almost every day of the trial.

Hedley Thomas, the journalist whose chart-topping podcast The Teacher’s Pet had invigorated the public fascination with the case and ladled pressure on the police to land a conviction, sat in the centre of the front row wearing a pink tie.

Police had reopened their investigation into the case three years before his podcast was broadcast, but Dawson’s legal team used it at every opportunity to advance his interests – first by attempting to put a permanent stay on the trial and later to discredit prosecution witnesses.

Tapped phone calls caught Thomas riffing with one man later called as a witness on who might portray him in the film version of the podcast. Hugh Jackman’s name came up. There was a real possibility that by bringing attention to the case, Thomas had neutralised evidence that might bring a conviction.

Justice Ian Harrison’s reasons for his pronouncement of guilt, which he read over nearly five hours, surged and receded like a sea tide, beginning on an ebb flow with the improbability of the Crown proving beyond reasonable doubt that Dawson had killed his wife.

In order to return a guilty verdict, Harrison observed, he would need to find beyond reasonable doubt that Lynette was dead and that her death was caused by a conscious, voluntary act carried out by Dawson with the intent to kill. And yet there was no body, there was a set of “facts” that were open to interpretation, memories were faded and witnesses had died.

Dawson’s family nodded their heads. A male supporter leaned forward on his knees.

But as Harrison methodically discredited various claimed sightings of Lynette as fabricated, mistaken or otherwise unconvincing, the sea drew back to expose the paucity of evidence that she was still alive, and the Crown case rushed to fill the void.

When Harrison outlined the evidence given by the former schoolgirl, who had been given the court pseudonym JC, one of Dawson’s supporters stood up and left the room in disgust, with a dozen faces leaning forward to peer after him. Harrison found JC’s evidence to be plausible in almost all respects.

“I was left with the impression that [JC] felt that she had been, and was in fact, swept up in circumstances over which she had only limited control,” Harrison said.

He visited the evidence given by witnesses who had been interviewed by Thomas, finding them credible apart from one woman who might have conflated what she remembered with what she had been told by the journalist. He pulled apart weaknesses in the Crown case and discussed the high bar to establishing that Dawson had caused her death.

But towards the end of the fourth hour, his focus narrowed back towards the events leading up to the disappearance of Lynette on January 8, 1982, when Dawson sensed he was about to lose JC. He hatched various plans for them to live together – looking for a flat in Manly, attempting to sell his marital home in Bayview and driving with JC to Queensland – but each of them fell through.

It was then he executed his final plan: to kill Lynette.

As Dawson was led down to the cells on Tuesday afternoon, Lynette’s sister-in-law Merilyn Simms stood before the flashing bulbs of a large media pack and reflected on what Lyn would have made of it all. 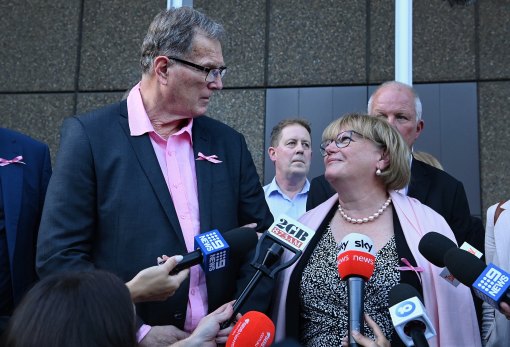 Lynette Dawson’s brother Greg Simms and his wife Merilyn Simms speak to a media scrum after the verdict.Credit:Kate Geraghty

“Lyn would be very humbled by the attention that she has got,” Simms said. “She was not an attention-seeker, she was a fun-loving person who loved her family, loved her children, but she would never have expected this.”

Our Breaking News Alert will notify you of significant breaking news when it happens. Get it here.