Hundreds of soldiers and civilians have been killed in the Donbas region of Ukraine in recent days. This is what some of those dead will have seen in their last moments of life.

These remarkable images, taken by the Daily Mail’s veteran war photographer Jamie Wiseman, show a heavily armed ground-attack aircraft swooping over the windscreen of the car in which he is travelling.

It is framed by the blue smear of the vehicle’s sun visor. Head on, its as yet un-dropped bombs and rockets are clearly visible under the wings.

The jet was one of a pair flying at extreme low level, along a country road. The leader is little more than 50ft above the sun-blasted highway that the Mail’s team are driving down — therefore less than 50ft above the car roof. In other words, at point-blank range. A direct hit will mean certain death.

Artillery remains the ‘queen of the battlefield’ in what is the most dangerous European war since 1945. But airstrikes are also taking a heavy toll.

Both aircraft were examples of the Sukhoi SU-25, known to Nato as ‘Frogfoot’ and used by Ukraine and Russia alike. They are slow – subsonic – but very heavily armoured, have a potent 30mm cannon for strafing and usually work in pairs. 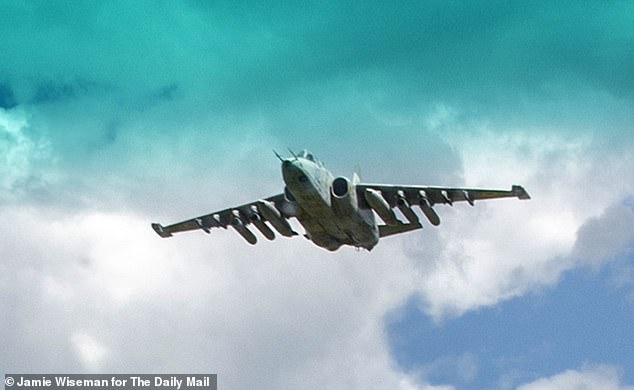 These remarkable images, taken by the Daily Mail’s veteran war photographer Jamie Wiseman, show a heavily armed ground-attack aircraft swooping over the windscreen of the car in which he is travelling in the Donbas region of Ukraine 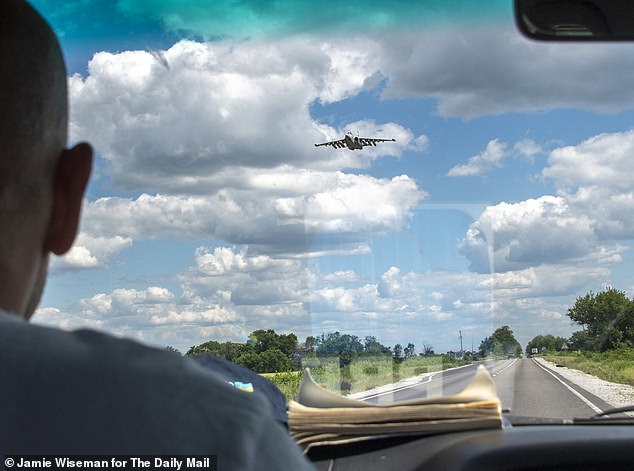 A Ukrainian Su-25 plane swoops along the highway outside the Donbass town of Pokrovsk in Ukraine, where families are fleeing Russian advances from along the nearby front lines

Given the dangers imposed by modern radar and missiles, the SU-25s also have to operate at almost treetop level in order to survive. And so it was that they came upon Jamie’s car. It is still unclear which side they belonged to.

Jamie has form for taking pictures of hostile aircraft at low level. In a village in southern Lebanon in 2006 he captured a remarkably sharp image of two Israeli F-15 jets passing at rooftop height while most of his colleagues – including me – were scrambling for cover.

I wasn’t there in Donbas this week. He was. Let him tell how it happened.

‘We were ten miles past the village of Petropavlivka on the E50, a single carriage road, about 30 miles from Pokrovsk which is the last stop on the train line being used to evacuate civilians from the front lines.

‘Pokrovsk is at the opening of the Russian ‘jaw’ closing in on Lysychansk, Kramatorsk and the now inaccessible town of Severodonetsk, and itself no more than 20 or 30 miles from the nearest hostilities.

‘Indeed, it was hit by three missiles the evening before we arrived, damaging a freight train carriage and leaving a 20ft crater by a road on the outskirts of town, with a dozen houses damaged. The first of the two aircraft came hurtling down the road towards us. I said out loud, as calmly as I could in the seconds it approached, that I hoped it was a Ukrainian plane. 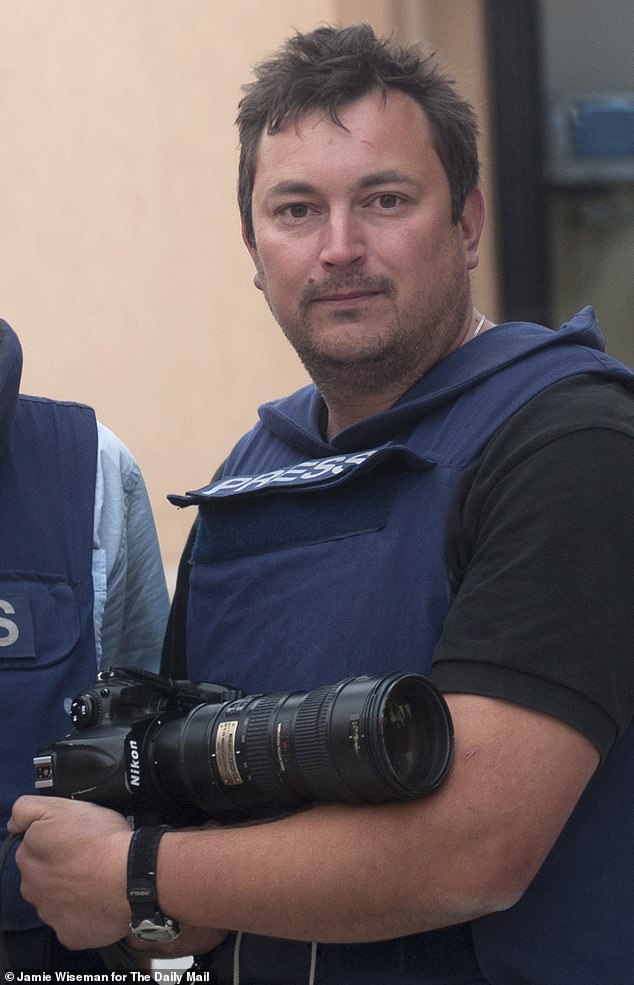 ‘But even before I’d finish speaking I realised there was absolutely nothing we could do about it if it wasn’t. It came in so low, we could see the bombs attached to the underside of the wings.

‘I grabbed a camera as we saw the second in the distance, and snapped it as it passed overhead, slightly to our left. They continued straight down the road behind us, before flaring up and banking to the left.

‘We still don’t know if they were Ukrainian or Russian, but our fixer Oleks (whose head is in the picture) reassuringly, although without much confidence, pronounced them Ukrainian.

‘Their speed was breathtaking, and I don’t remember hearing them at all until they were almost overhead. I turned to look back after the first passed to see if they were going to double back. We’d passed a Ukrainian checkpoint only a few minutes earlier. Perhaps that was their target instead?

‘But they climbed and banked and as quickly as they appeared they were there no longer.’

Jamie added: ‘It’s something that used to happen quite frequently on patrol in Afghanistan, ‘a show of strength or support’, the soldiers used to say.

‘But in that battlefield the only people flying were friendly. Here in Ukraine, how can you possibly tell?’

There is nothing ‘friendly’ in Ukraine’s skies these days.