THE THUGS who tarnished the Black Lives Matters protests by attacking police will be treated with "complete severity", Priti Patel has warned.

The Home Secretary today vowed to hand out severe penalties to those whohurled fireworks and other objects at cops during the unrest at the anti-racism protest in Whitehall. 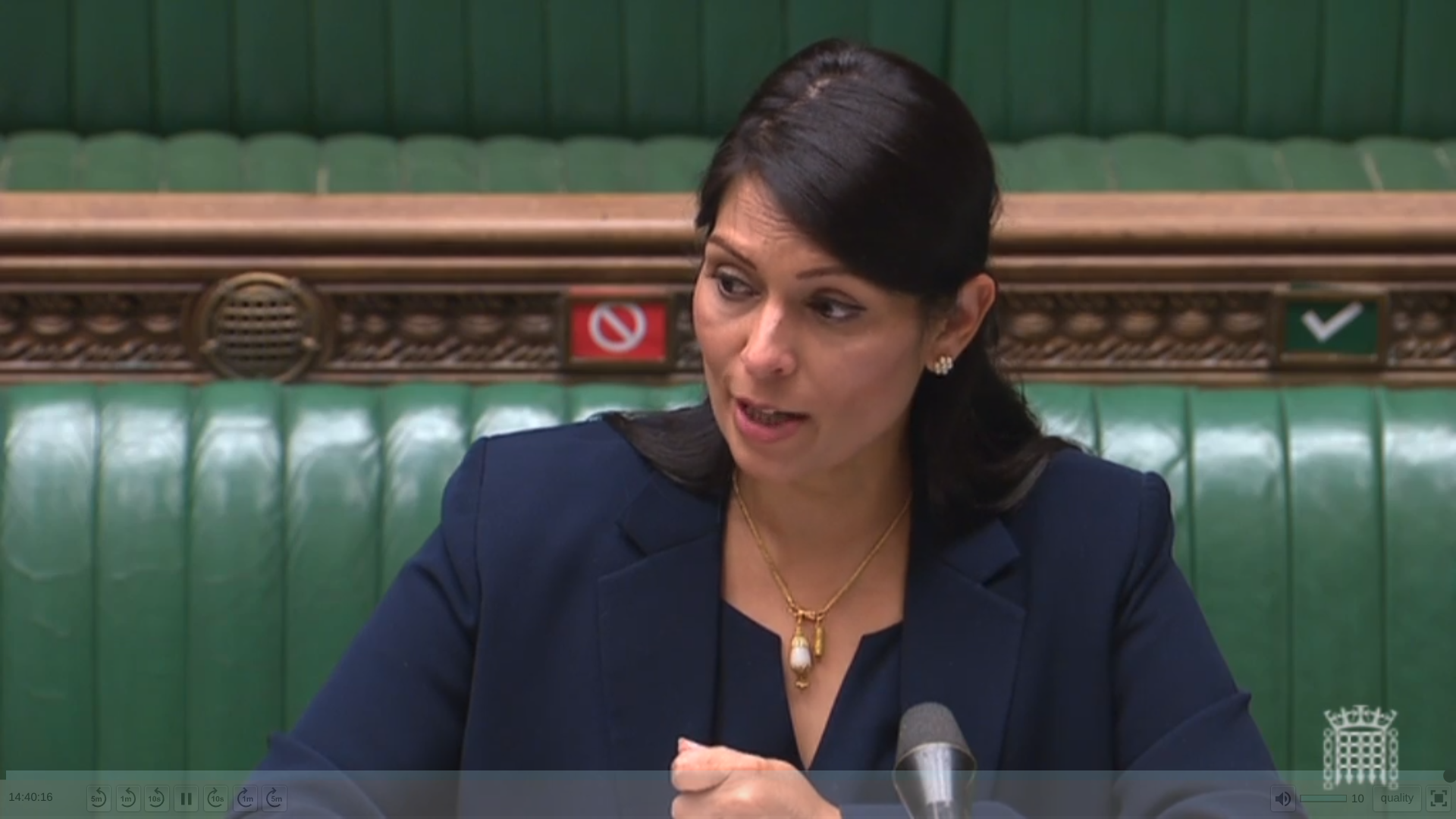 Speaking in the Commons, Ms Patel promised everyone who attacked the officers would be prosecuted.

She said: “We strongly support the right to protest peacefully but that does not extend to the violent behaviour we have witnessed across the country throughout the weekend.

“When it comes to any assault on our brave police that is unacceptable.

“Any perpetrator should be in no doubt they will be arrested and prosecuted.

“Assaults on emergency workers must be handled with complete severity by the justice system in a consistent way.

“This Government will go even further as we have committed to consult on doubling the sentence for an assault on an emergency worker so the penalty really fits the crime.”

Matt Hancock also bashed the protests, warning they would spread the virus.

The Health Secretary said: “It is incredibly important that people follow the social distancing rules and the demonstrations that we saw over the weekend where they did not follow them risked increasing the spread of the virus.

"It is a mistake for people to participate in demonstrations that help to spread this vile disease."

Disturbing footage shows a group of officers being surrounded by a masked mob forcing them to flee as glass bottles and other projectiles are launched at them.

One demonstrator was seen climbing on the national war memorial, The Cenotaph, which is dedicated to those who died in WWI, and setting fire to the Union flag.

Sunday's peaceful protests, which were spoiled by a minority of thugs, took place outside the US Embassy in a response to the death of George Floyd in Minneapolis last month. 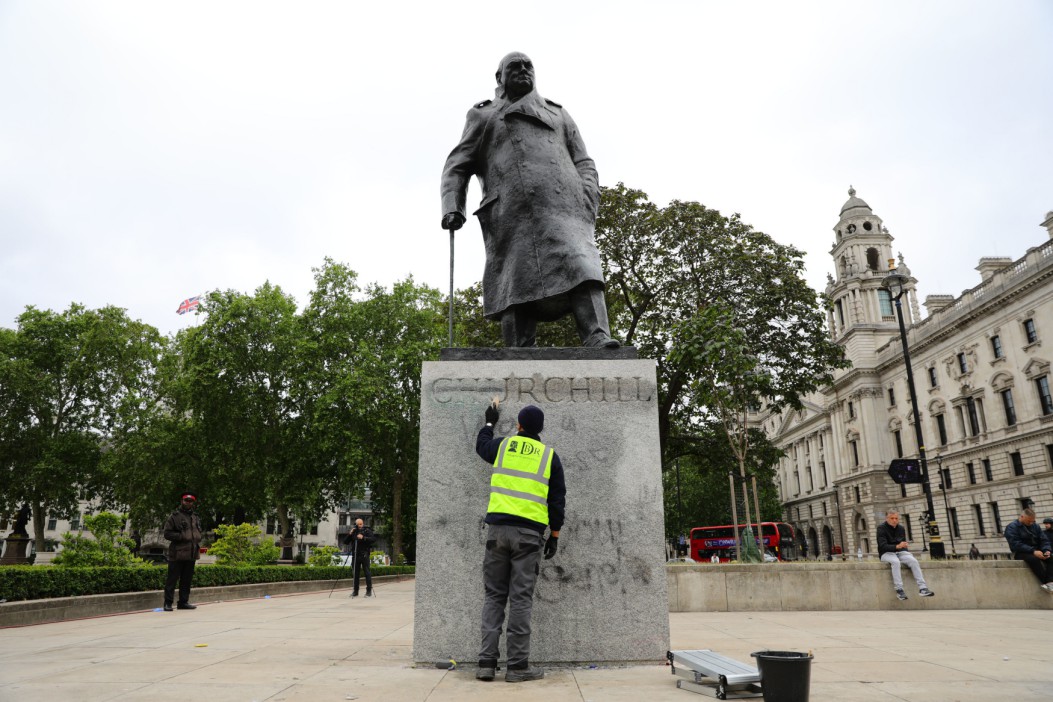 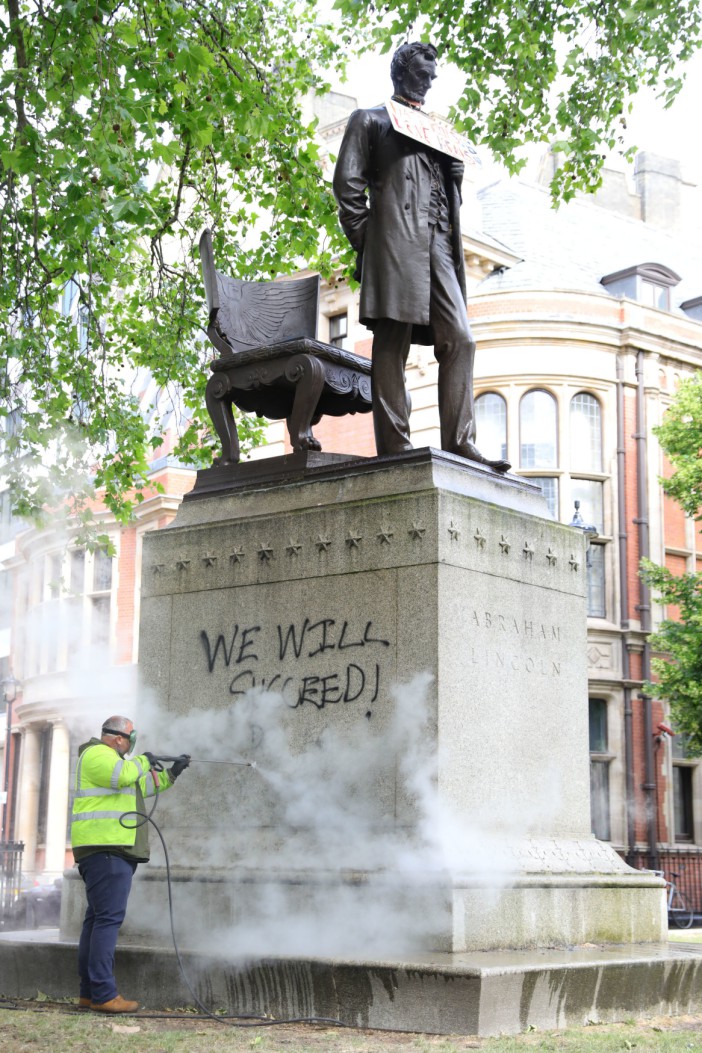 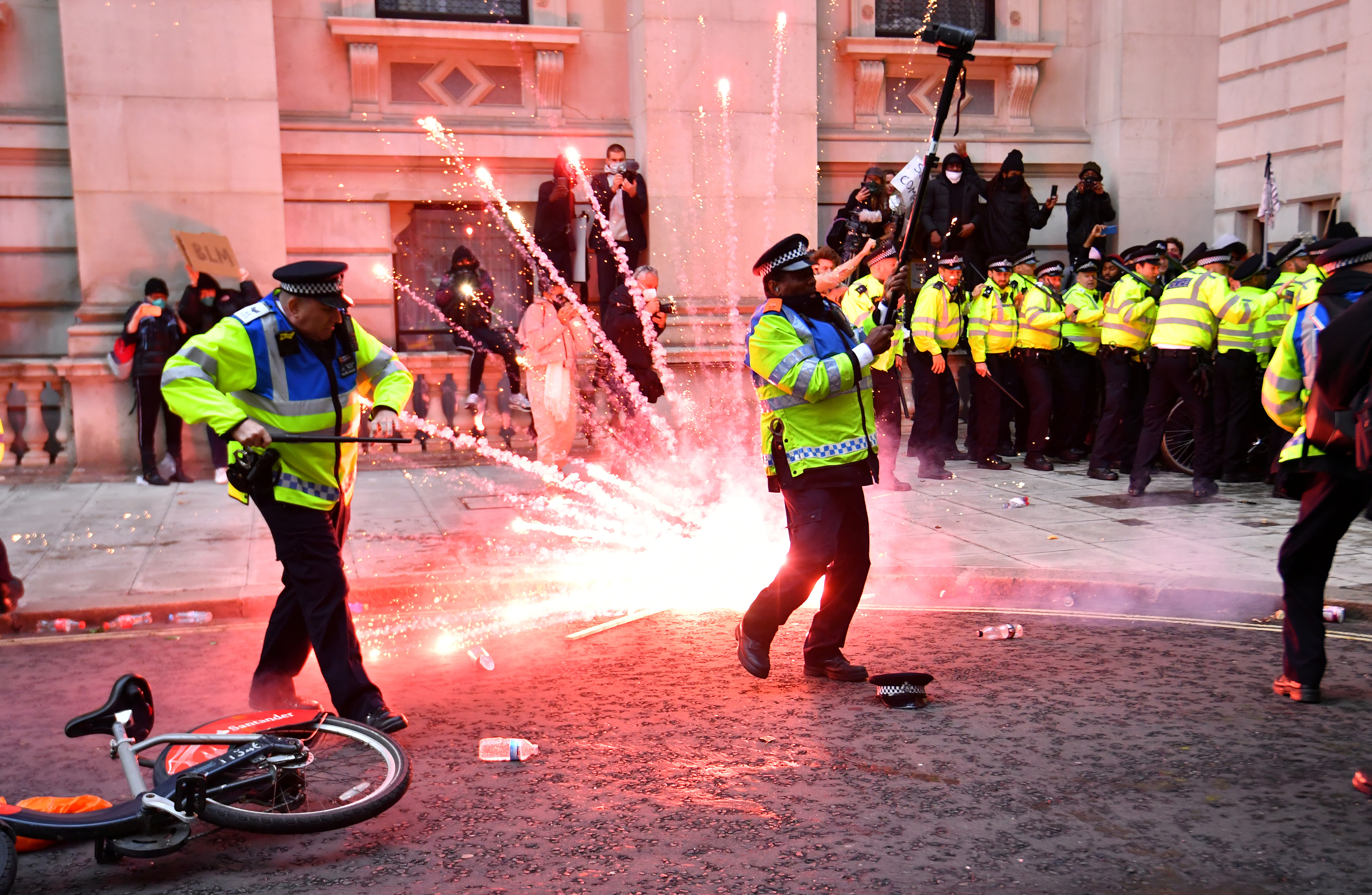 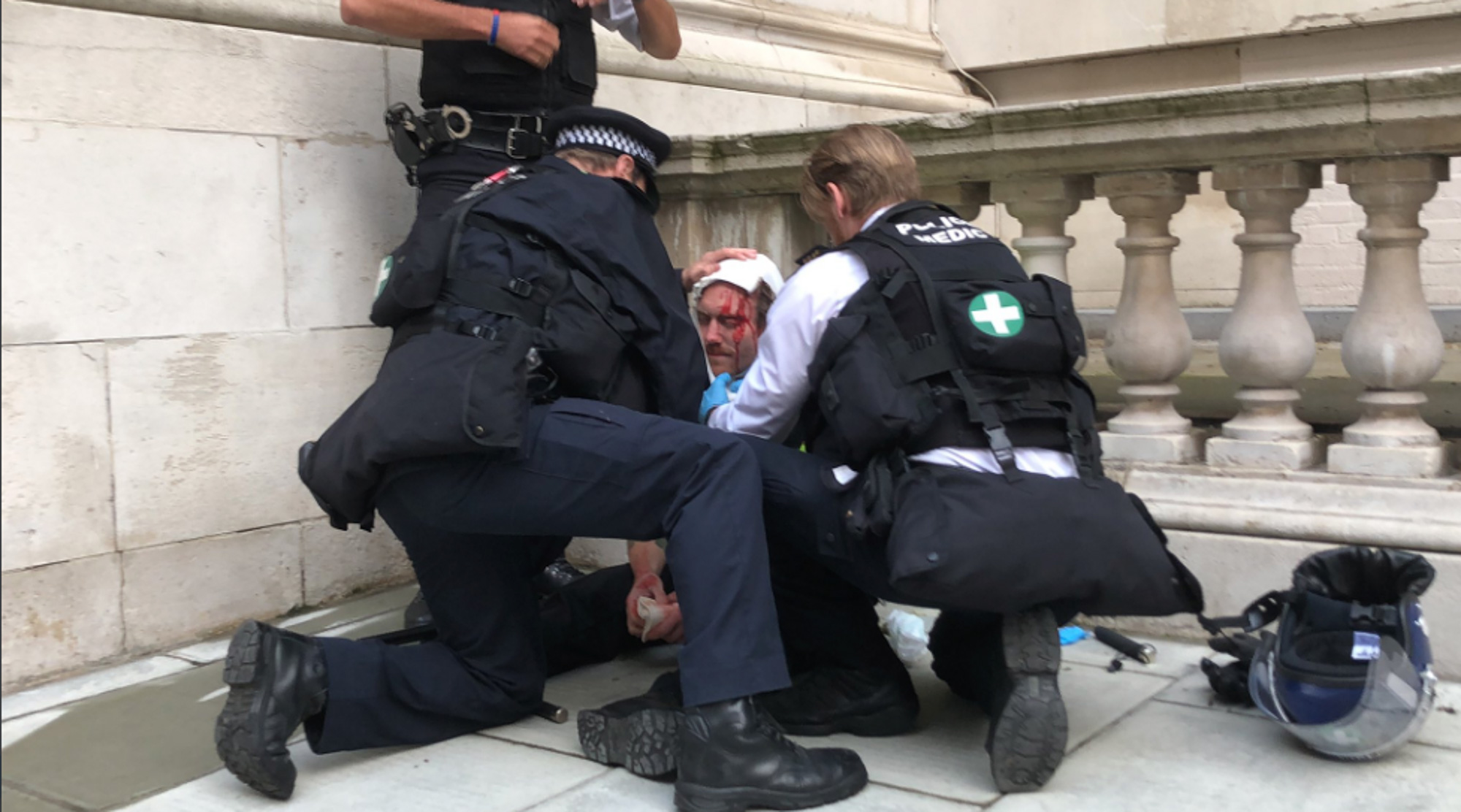 His comments came as a statue of slave trader Edward Colston was toppled as jubilent protesters jumped up and down on it in Bristol.

Dramatic pictures show crowds holding up signs reading "Black Lives Matter" as they chant the name of the movement.

Now the Labour mayor of the city has praised those who brought the statue down, rolled it through the streets and threw it into the harbour.

"I think it would be an iconic moment that would draw attention… my concern is that racism is tackled not just through pulling down statues."

Earlier today Sir Keir Starmer told LBC the tearing down of a statue of slave trader Edward Colston in Bristol was "completely wrong".

He said: "It shouldn't have been done in that way. It was completely wrong to pull a statue down like that.

"Nobody should condone the lawlessness,  if the statue is coming down, it shouldn't come down in that way – there is no question of that."

He said: "The way we do things in this country is by democratic process. Not by mob rule.

"Undoubtedly, what was done to that statue was a crime. An investigation should be underway and prosecutions should follow."

The past few days have seen activists in face masks holding placards reading "I can't breathe" to echo the final words of Floyd after white police officer Derek Chauvin held him down by kneeling on his neck.

Others have taken a kneel in solidarity with those of who have accused police of brutality on a global scale.

Superintendent Jo Edwards, spokesperson for the protests, said: “Regrettably officers were faced with further scenes of violence and disorder following a day of predominantly peaceful protest throughout the capital.

“This is a hugely impassioned movement and we understand the public’s desire to have their voices heard – however it is not right that this passion has turned into violent attacks on officers.

“I would like to thank our officers, and those from the City of London Police and British Transport Police for their professionalism in the face of entirely unacceptable behaviour.

“Overnight our policing operation will continue and I would urge demonstrators thinking of returning to stay at home. The threat of Coronavirus remains very real, and we need you to protect yourselves, your friends and your family.”

Protests in London and the rest of the UK have mostly been peaceful throughout the weekend.

Yesterday, the protesters marched on the US Embassy in Battersea after Floyd was killed in Minneapolis on May 25 in a tragedy that shocked the world and highlighted issues of racism by police.

They made their way to Whitehall across Vauxhall Bridge as the protest continues.

The Winston Churchill statue was defaced for a second day in a row during the protests in London.

Churchill's name was crossed out and in black spray paint 'was a racist' was written underneath.

A further 4,000 people have descended on a gathering in Bristol and peaceful demonstrations are also being held in Edinburgh and Glasgow. 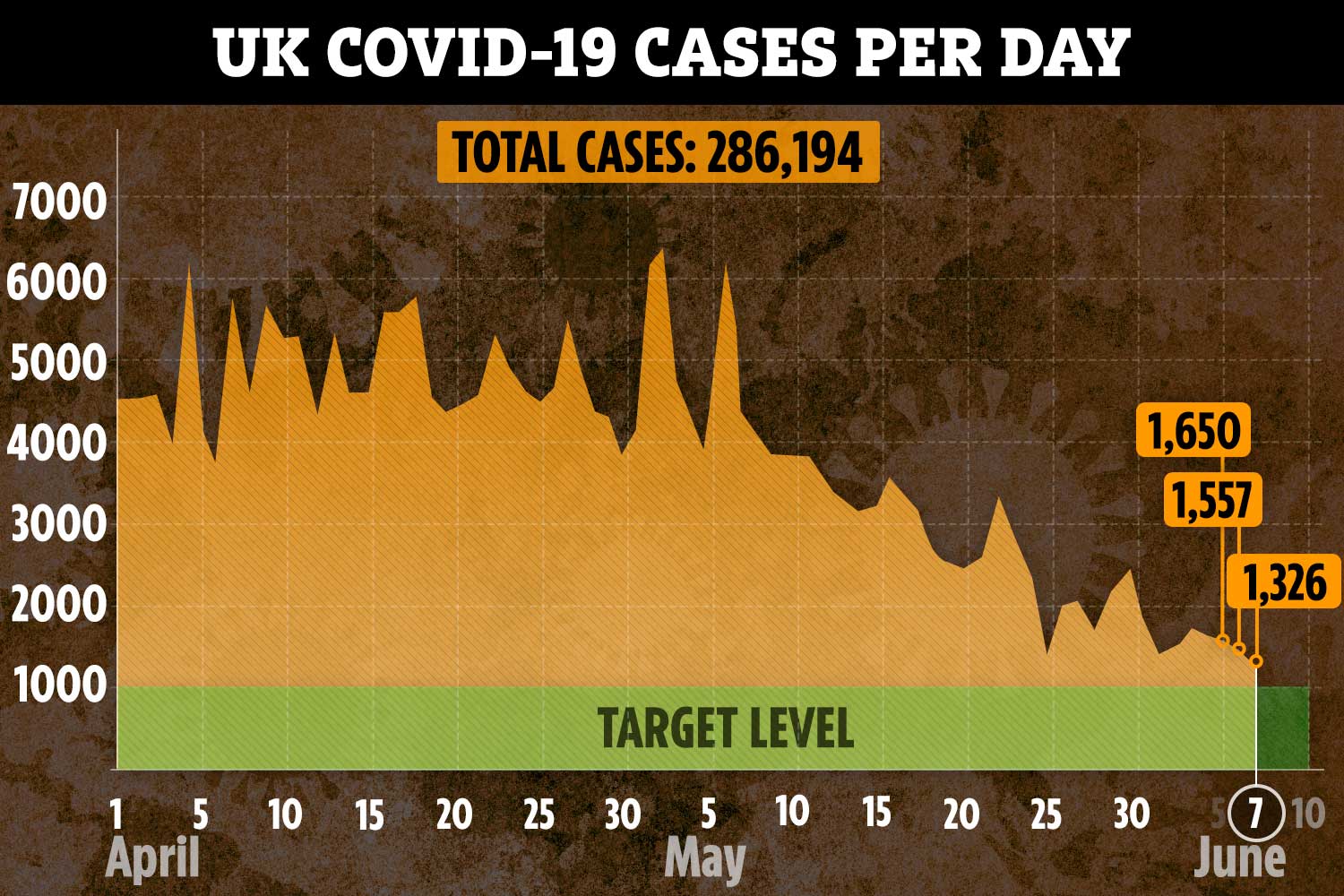 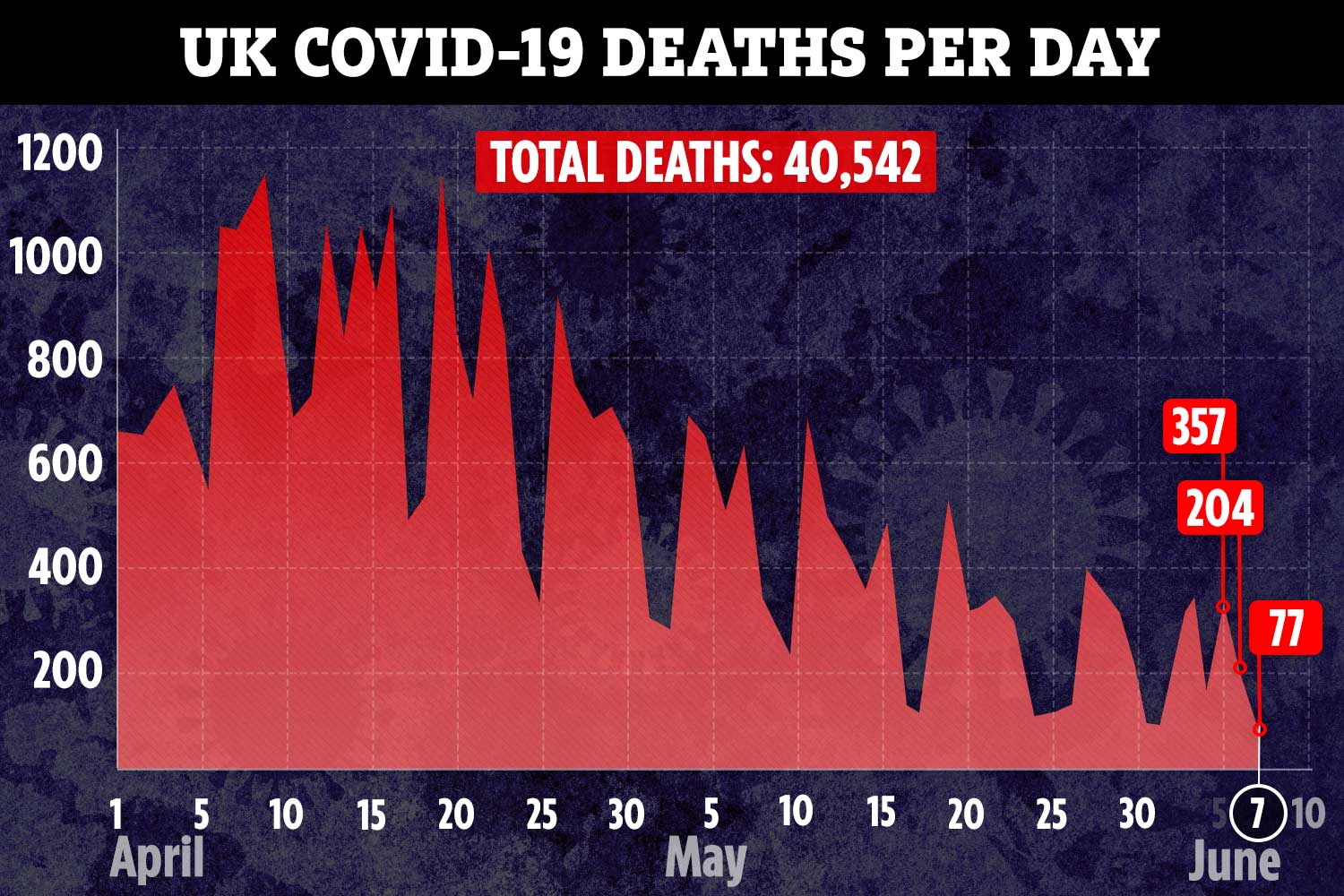