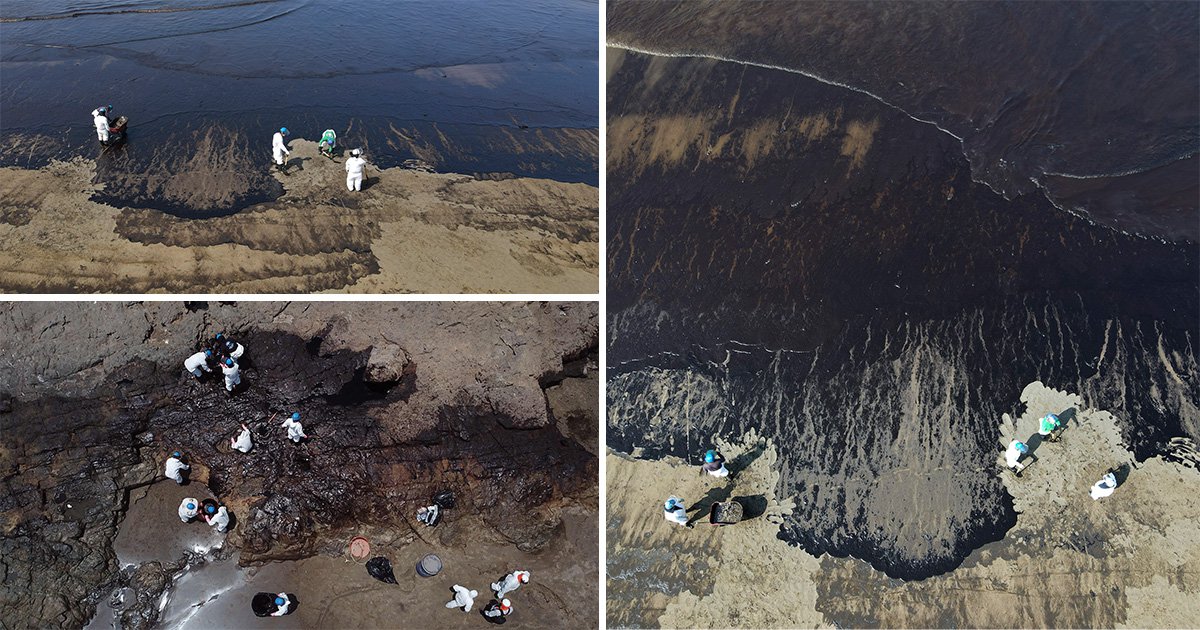 Peru has been hit by a major oil spill sparked by the devastating underwater volcano eruption in Tonga.

Two people have also drowned in the South American country, after it was hit by freak waves caused by the incident more than 10,000 km away.

There are fears that the incident will be harmful to wildlife and even human health.

The authorities sealed off three beaches on Monday after oil was spilled from a tanker battered by violent waves sparked on the other side of the Pacific Ocean.

The Pampilla Refinery, part of the Spanish company Repsol, branded the spill off the coast of Callao and Ventanilla districts near the capital Lima ‘limited’.

The spill occurred while unloading crude oil from the ship on Sunday.

The National Emergency Operations Center added that the spill had been brought under control, with environment minister Ruben Ramirez explaining that the accident had affected a two-mile stretch along three beaches.

But, he warned: ‘There is great damage to biodiversity, and it could even impact human health.

‘And so it has been ordered that the area is cut off for all kinds of activity.’

Pampilla could face a fine of up to $34.5 million (£25.4 million) the environment ministry said, as prosecutors opened an investigation into the company for environmental contamination.

Pampilla – which did not indicate exactly how much oil was spilled – said it was working with authorities to clean up the affected beaches.

Ships worked on collecting oil still floating in the water, while workers in protective gear began cleaning oil that had washed ashore.

Ventanilla resident Brenda Ramos said: ‘We want to tell the environment ministry to please follow up, and that those responsible receive a punishment, because this affects the fishermen, the population that they feed with the fish, and marine animals.’

Meanwhile, two women were confirmed to have drowned in another part of the country after being caught in waves caused by the eruption.

Tonga, a southwest Pacific island, has been nearly entirely cut off from the outside world after the eruption severed an undersea communications cable.

The eruption sent shockwaves around the globe and was heard as far away as Alaska, while also triggering a tsunami that flooded Pacific coastlines from Japan to the United States.

Get in touch with our news team by emailing us at [email protected].

For more stories like this, check our news page.