Trevor Noah has taken a brutal swipe at ‘spoilt’ King Charles III just days after the monarch acceded to the throne following the death of his mother.

The profane South African comedian told his guffawing audience on the Daily Show: ‘This dude can barely pull his d*** out of his own pants.’

He aired widely shared footage of the King caught on camera becoming frustrated with a leaking pen as he said: ‘Oh God, I hate this. I can’t bear this bloody thing.’

Earlier the royal gestured furiously to one of his aides to remove a pot of ink.

Noah, 38, told his audience in the US how the clips during Charles’ period of mourning shows how he is not the right person for the monarchy.

He said: ‘It’s going to take a lot of work to shape the monarchy into something that everyone can get behind.

‘But based on his first week in power, looks like King Charles isn’t the guy to do it.’

The remarks are not the only ones from US media to spark fury in Britain, with the New York Times accused of a ‘sneering attack’ on the royals. 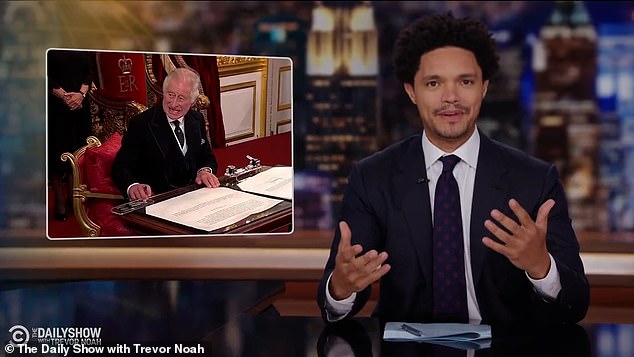 The paper said the Queen helped to ‘obscure a bloody history of decolonization’, then inflated figures as they questioned why her funeral should be paid out of taxes, despite the vast majority of Britons being in favor of a fitting send-off.

Noah continued in his cynical diatribe: ‘I love how Charles says the pens leak on him all the time.

‘You’re literally the King of England, dude! If you don’t like the pens, get different pens. I’m not an expert in the monarchy, but I’m pretty sure the hierarchy doesn’t go: Prince William, King Charles and then the guy who buys the pens.’

He added: ‘Still, I feel kinda bad for him. I do. Because in the old days, the King would’ve never had these issues. There would be no leaking pens.

‘Maybe King Charles is just stressed out right now, maybe that’s why this is happening. Because becoming king is a lot of pressure, I mean there’s like 15 different forks to memorize, you have to sleep with that crown on, that’s not comfortable. 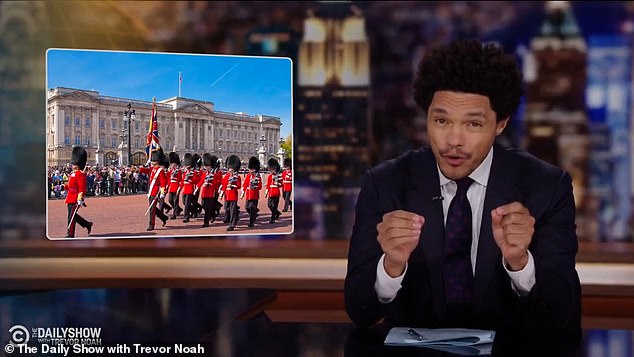 Noah, 38, told his audience in the US how the clips during Charles’ period of mourning shows how he is not the right person for the monarchy 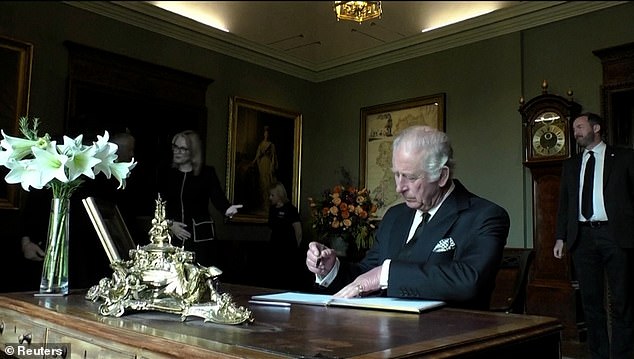 King Charles, sitting inside the royal residence of Hillsborough Castle, Northern Ireland, appeared frustrated by the dripping ink as he tried signing a book

‘But if you paid attention to King Charles back during his prince days, you would know that this is pretty much how he’s always been.’

Burrell claimed he was the ‘only man Diana never trusted but others have denounced him as a royal ‘hanger-on’ who sold stories to the press, and who Charles accused of ‘exercising pathetic vendettas in public’.

The ex-butler turned reality star went on to release a memoir about his experiences with the royals which Prince William said would have ‘mortified’ his mother, accusing him of ‘cold and overt betrayal’.

In the clip aired on the Daily Show, Burrell says: ‘The Prince of Wales has grown up in such a privileged lifestyle that he doesn’t have the mechanics to choose for himself anymore.

‘His pajamas are pressed every morning, his shoelaces are pressed flat with an iron, the water temperature has to be just tepid and only half-full. Prince Charles does have his valet squeeze one inch of toothpaste on to his toothbrush every morning. 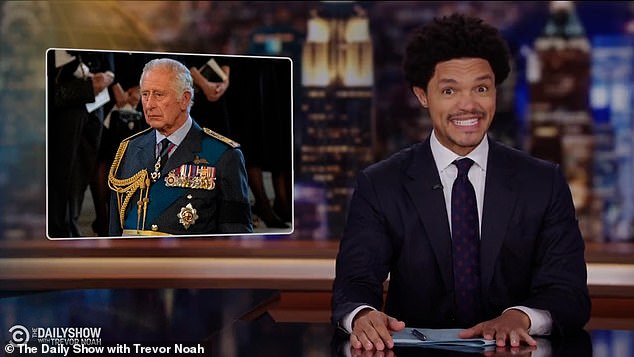 ‘On one occasion, he rang me from his library and he said: “Oh Paul, a letter from the Queen seems to have fallen into my wastepaper bin, would you pick it out?” The wastepaper bin was there, he was sat there, I had to bend down into the paper bin, pick out the letter, put it back on his desk, “Would that be all Your Highness?”‘

Noah feigned outrage at the claims to his shocked viewers.

He said: ‘When I was a kid, I thought kings had to pull swords out of stones. This dude can barely pull his d*** out of his own pants?’

‘You know what this tells you, this story about Charles is one, the royals have been royally spoilt, and two, I can tell you that nobody who works in that palace is African.’

The comedian then impersonated an African woman telling Charles: ‘There is only one king and that is Jesus.’

US media has been slammed in the UK for its coverage of the Queen’s death.

In a story on Wednesday, the New York Times reported that the British taxpayers would front the bill of the funeral costs, which will reportedly cost more than $6million.

The story labeled it a ‘hefty price tag’ amid rampant inflation in Britain, but readers were unamused by the article as they slammed the tone of the reporting regarding the late monarch of 70 years. 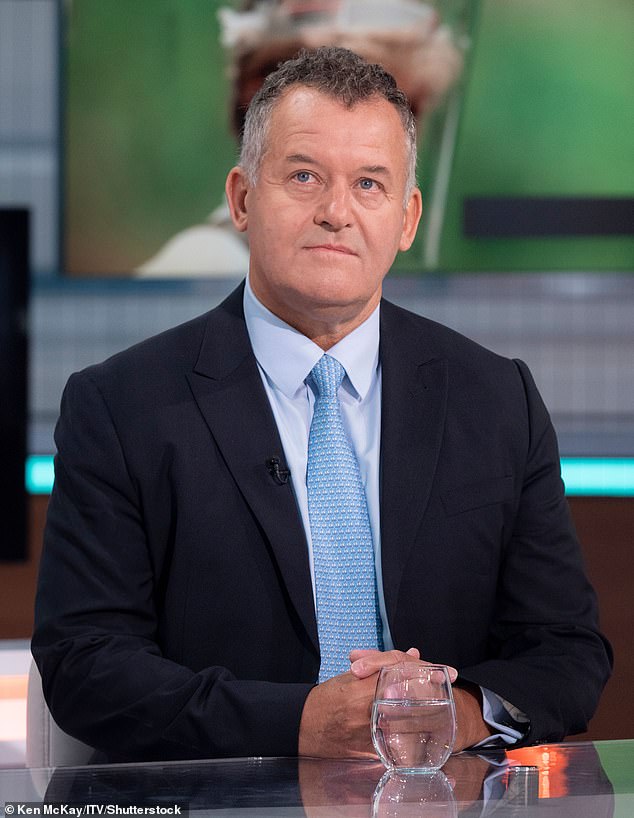 Soon after publishing the story, Ben Judah, a senior fellow at the Atlantic Council tweeted the actual cost per household would be just five pence each.

Using the New York Times’ estimate of the Queen’s funeral cost, the UK’s 28 million households would have to pay just 20 pence each.

By Thursday, the Times admitted it was wrong and published a correction to the story, noting the UK’s inflation is not actually as bad as it originally reported.

Rather than the more than 10 percent inflation the Times pushed, the correction said: ‘The country’s inflation rate is at nearly 10 percent; it does not exceed 10 percent.’

It also said ‘while the Bank of England said last month that it expected a long recession to begin this year, that was before a new plan proposed by Prime Minister Liz Truss to cap soaring energy costs.’

Twitter user Dorren Wilson said: ‘Your newspaper has been unfailingly full of snark, on a story that doesn’t belong to you. Disappointing.

‘I subscribed for five years, but you’ve confirmed the wisdom of letting it go.’ 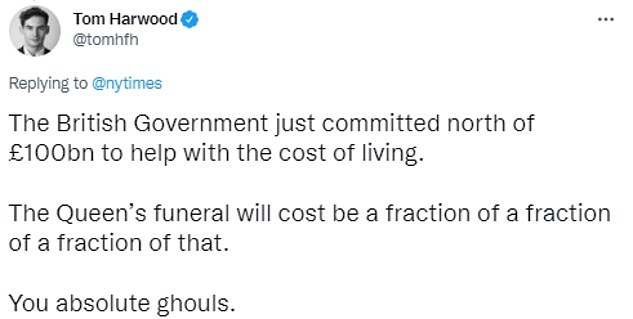 Readers took to social media to condemn the tone of the reporting just days after Queen Elizabeth’s death, marking an end to her 70 year reign

Wilson was not alone in her criticism of the Times, fellow Twitter user Robert Corbishley said the cost to taxpayers would still be less than the $7 paper.

‘Less per person than the price of one copy of your “newspaper,”’ he wrote.

Tom Harwood, a British political commentator, noted that the British government was already committing billions of pounds to tackle inflation.

The backlash came a week after the paper garnered criticism over an article by Maya Jasanoff, a history professor at Harvard University, where she focuses on the history of Britain and the British Empire and said it was wrong to ‘romanticize’ the crown.

‘The queen helped obscure a bloody history of decolonization whose proportions and legacies have yet to be adequately acknowledged,’ she wrote as other reporters around the nation joined suit to criticize the late Queen’s reign. 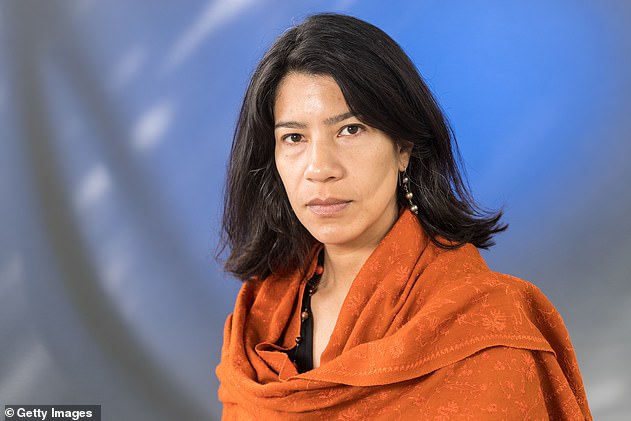 Maya Jasanoff, a Harvard professor specializing in the history of the British Empire, wrote for the Times last week that it was wrong to ‘romanticize’ the Queen’s rule

New York Magazine’s The Cut has been seen as the biggest offender over its coverage of the Queen’s death and the British Royal Family.

The liberal magazine that published an in-depth interview with the Duchess of Sussex, Meghan Markle, in August, has recently targeted King Charles in a new piece that was published online on Wednesday.

The latest story is titled: ‘King Charles’s Reign of Fussiness Has Begun,’ which comes days before the Queen’s funeral, which is scheduled for Monday.

The article points to reports that Charles went through two ‘tantrums’ in the days after his mother’s death. One was the report that he stormed out of a signing ceremony in Northern Ireland when a pen leaked on him, another was when he ‘trussed up in tails and hissing at palace aides who failed to move a pen tray off his table with due haste.’

The king apparently gestured to aides to help him to make some room on a cluttered desk.

The Cut goes on to mention a report from the Guardian in which it was alleged that Charles chose to tell close to 100 employees that he was letting them go as he prepares to move into Buckingham Palace during a memorial service for his mother.

A source told the newspaper: ‘Everybody is absolutely livid, including private secretaries and the senior team.’ 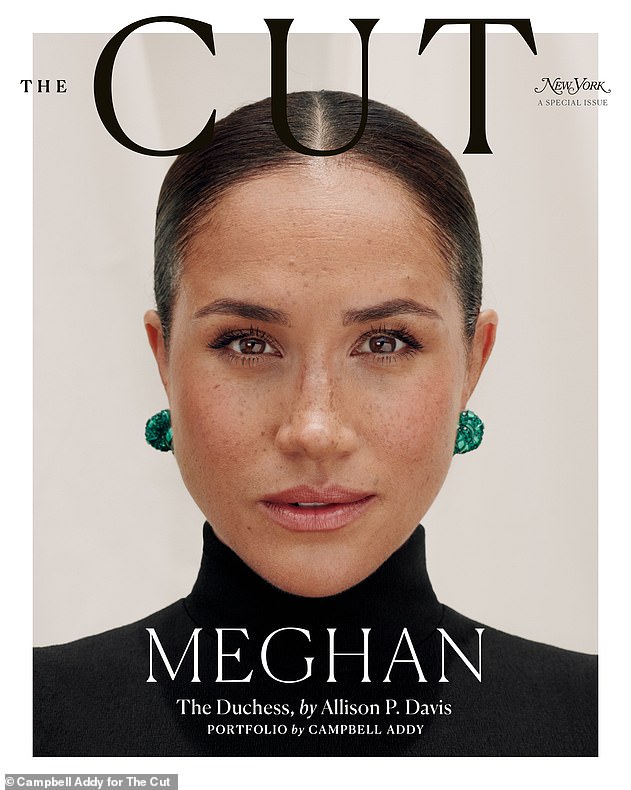 New York Magazine’s The Cut, which published an in-depth interview with Meghan Merkle, has been seen as the biggest offender over its coverage of the Queen’s death

The article concludes by one of Meghan Markle’s many unproven allegations against Charles, that he was racist about her son, Archie, and accuses him of ‘mundane cruelty’ to his wife, Princess Diana.

Infamously, shortly after the Queen’s death, The Cut published an article titled: ‘I Won’t Cry Over the Death of a Violent Oppressor.’

The piece was an interview Carnegie Mellon linguistics professor Uju Anya who tweeted on Thursday: ‘I heard the chief monarch of a thieving raping genocidal empire is finally dying. May her pain be excruciating.’

Anya told the Cut that the Queen was a ‘representative of the cult of white womanhood.’ 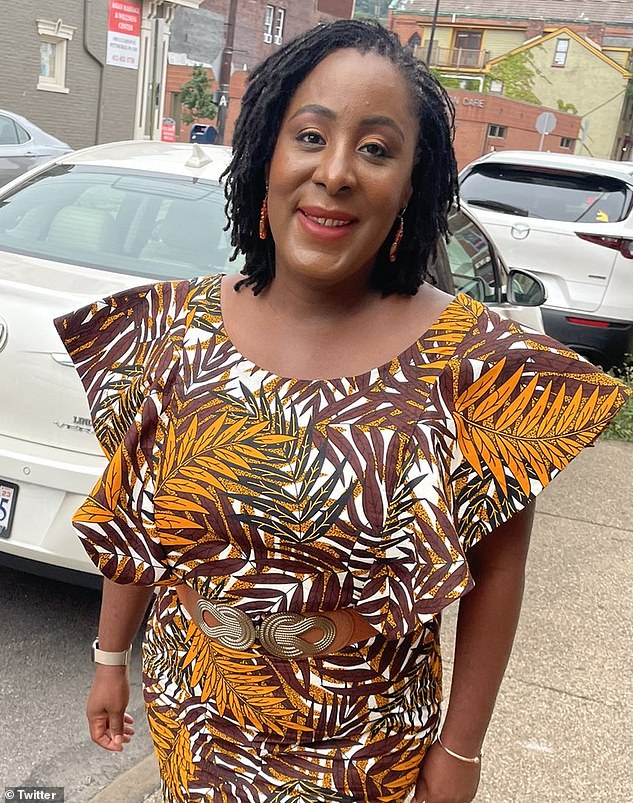 Uju Anya, a black applied-linguistics professor at the Pittsburgh university, said on Friday: ‘Queen Elizabeth was representative of the cult of white womanhood’

Shortly before the Queen’s passing was announced on Thursday, Anya tweeted that she hoped her death would be ‘excruciating’

Anya, an applied-linguistics professor at the Pittsburgh university, is the daughter of a mother from Trinidad and a father from Nigeria.

She told NBC News that she is ‘a child of colonization,’ and that her perspective was shaped by Britain’s role in the Nigerian Civil War.

‘My earliest memories were from living in a war-torn area, and rebuilding still hasn’t finished even today,’ she said.

She defended her remarks opposing the monarchy and added that the Queen was not exempt from the decisions made by the British government ‘she supervised.’

‘Queen Elizabeth was representative of the cult of white womanhood,’ Anya said.

‘There’s this notion that she was this little-old-lady grandma type with her little hats and her purses and little dogs and everything, as if she inhabited this place or this space in the imaginary, this public image, as someone who didn’t have a hand in the bloodshed of her Crown.’