Some supporters of President Trump who gathered for a rally outside the California Statehouse on Saturday say they found their vehicles damaged when they tried to leave the event, according to a report.

The damage – allegedly at the hands of counter-protesters who showed up — included smashed windows and slashed tires, FOX 40 of Sacramento reported.

“There is no need to go trashing other people’s stuff,” Trump supporter Karyn Tompkins told the station. “Our tires on the right side have been slashed.”

Opposing groups have had a series of confrontations near the Statehouse since the Nov. 3 election, the Sacramento Bee reported. 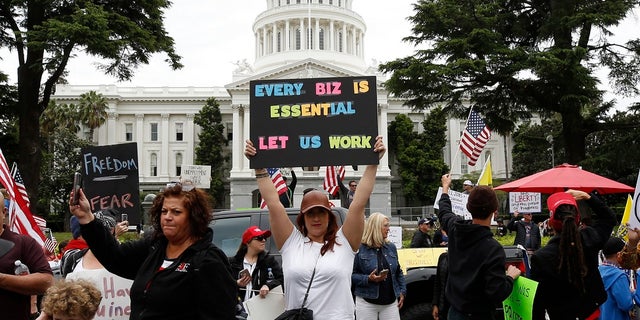 Protesters rally at the state Capitol in Sacramento, Calif., in an undated photo. (Associated Press)

Carlisle said her truck’s tail lights were smashed and there was damage to the tires, windshield and side mirror as well.

During the dueling demonstrations, police officers tried to keep the two sides separated – but members of both sides threw objects such as bottles and fireworks at each other, police told FOX 40.

Carlisle said she respects other people’s right to disagree with her – but not to damage property or cause other harm.

“We are all different and that’s what makes America great,” she said. “Embrace it.”

No arrests had been made as of the early evening but Sacramento police were asking that any instances of vandalism be reported to them.