Former US president Donald Trump has attacked New York state’s attorney-general for launching a criminal probe of his family business, saying he was “being unfairly attacked and abused”.

“There is nothing more corrupt than an investigation that is in desperate search of a crime,” Trump said in a statement on Wednesday (Thursday AEST), adding that “we will overcome” any attempt at prosecution. 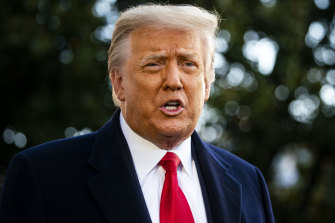 Donald Trump said “we will overcome” any attempt at prosecution.Credit:Bloomberg

The office of New York Attorney-General Letitia James, which has been investigating whether the New York City-based Trump Organisation falsely reported property values to secure loans and obtain economic and tax benefits, said on Tuesday its probe was no longer purely civil.

“We are now actively investigating the Trump Organisation in a criminal capacity, along with the Manhattan DA,” Fabien Levy, a spokesman for James, said in a statement, using the abbreviation for “district attorney”.

Trump on Wednesday assailed the investigation as politically motivated.

“The attorney-general of New York literally campaigned on prosecuting Donald Trump even before she knew anything about me,” the Republican former president said. James is a Democrat.

Vance’s office has said in court filings it was investigating “possibly extensive and protracted criminal conduct” at the Trump Organisation, including tax and insurance fraud and falsification of business records.