Twelve passengers from Qatar test positive for coronavirus in Greece

Greece has suspended all flights from Qatar after 12 passengers tested positive for coronavirus.

Qatar Airways claimed the passengers who tested positive after landing in Athens on Monday were healthy when they left Doha five hours earlier.

A dozen of the plane’s 91 passengers tested positive for the deadly virus – which has officially killed 45 people in Qatar.

They will all have to isolate for 14 days and those who tested negative will have to self-isolate for seven days to prevent the illness spreading further, according to the Mirror.

All flights to and from Qatar have now been suspended to prevent further infections being brought over from the country. Qatar has had 63,741 confirmed cases. 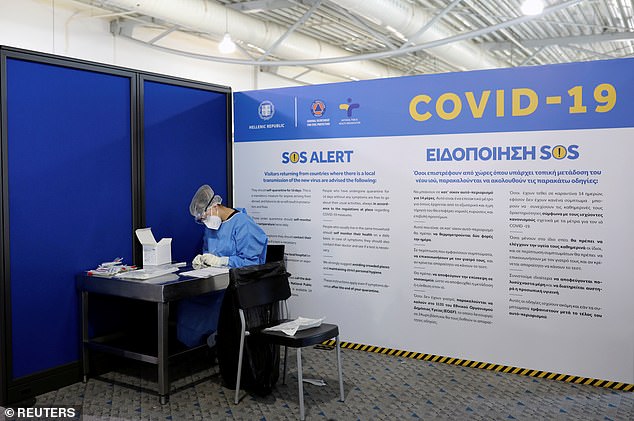 Qatar Airways claimed the passengers who tested positive after landing in Athens on Monday were healthy when they left Doha. Pictured, a civil protection worker prepared to test passengers at the Eleftherios Venizelos International Airport in Athens on May 18

‘Following these epidemiological facts, flights from and to Qatar are suspended until June 15,’ the Greek civil protection authority said in a statement.

But Qatar Airways denied allowing passengers with Covid-19 to fly.

In a statement Qatar Airways said: ‘Upon arrival in Doha and before boarding the flight to Athens, all passengers were screened and tested according to the procedures and established health protocols and were found suitable to continue their journey.’

The company said none of the passengers who tested positive were from Qatar. 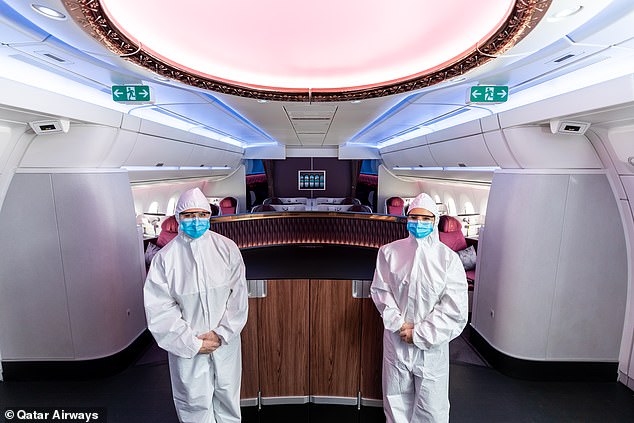 Greece has been praised for its low infection rate during the deadly pandemic. The country has had less than 3,000 cases. Sadly 180 people have died in the country from the illness.

It comes after Qatar Airways issued staff with hazmat suits to wear during in-flight service.

They were part of a raft of measures the airline introduced from Monday, May 25, as a result of the coronavirus pandemic.

Cabin crew had already been wearing face masks and gloves but are now wearing suits over their uniforms. It is also mandatory for passengers to wear masks or face coverings and there is a modified in-flight service. 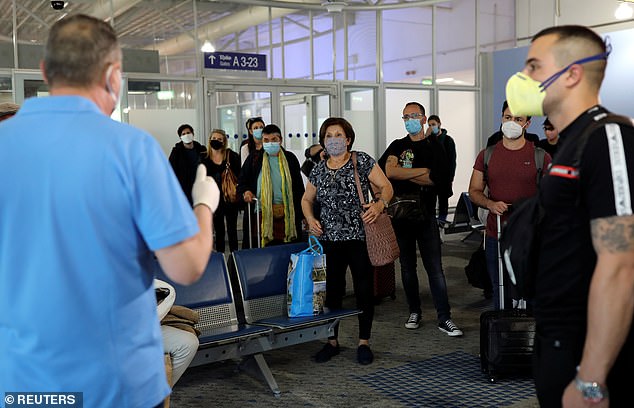 Passengers from the first Lufthansa flight to Greece, following a nationwide lockdown against the spread of the coronavirus disease, listen to instructions from a civil protection worker at the Eleftherios Venizelos International Airport

For example, business class passengers have their meals served on a tray instead of a table and cutlery is handed out in a wrap rather than individually to ‘reduce contact between the crew and the passengers’.

The airline said business class Qsuite passengers could display the do not disturb sign and keep the privacy door shut if they wanted to limit interactions with the crew.

In economy, all meals and cutlery is served sealed as usual.

Qatar said all meal service utensils and cutlery is washed with detergents and rinsed with demineralised fresh water at ‘temperatures that kill pathogenic bacteria’. 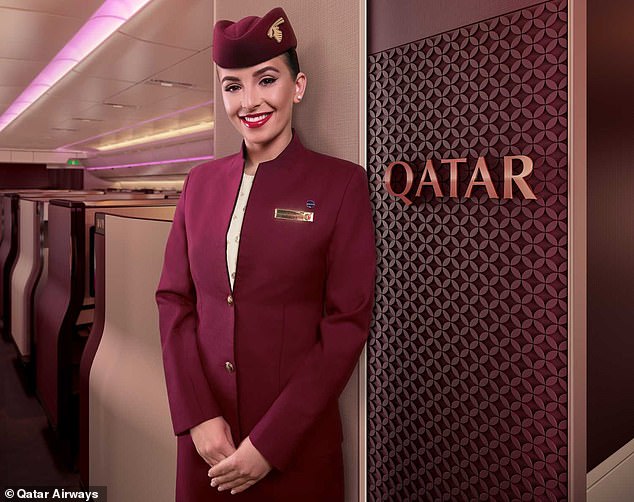 Large bottles of hand sanitiser are placed in the galley for use by both passengers and crew, while social areas onboard aircraft have been shuttered ‘to observe social distancing measures’.

The airline said it was encouraging social distancing where possible, especially on flights with lighter loads.

It explained: ‘Distancing is also implemented during the boarding process, ensuring passengers are allocated seats far apart from each other.

‘The airline is also encouraging passengers to follow hygiene practices recommended by the World Health Organisation (WHO), such as regular hand washing and refraining from touching the face.’ 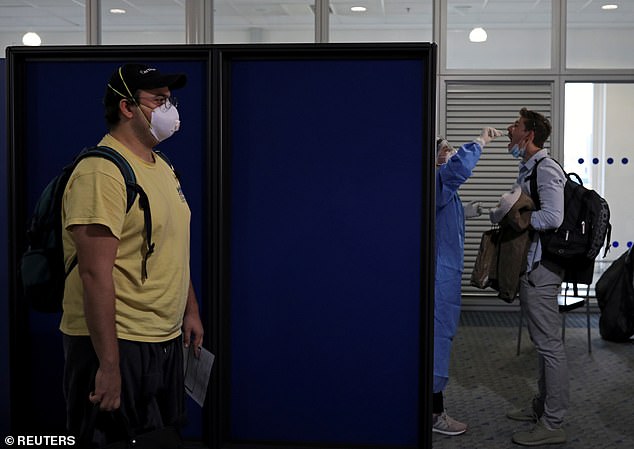 Cabin crew have been given training on how to minimise their chances of contracting or spreading the infection, according to the airline.

It explained crew are now thermally screened before the departure of flights and after their arrival.

They are then quarantined and tested if any colleagues or passengers on a flight show any symptoms of infection or test positive for the virus.

The airline also revised its distribution of cabin crew on flights, sending two groups on short-haul and medium-haul flights – the first to manage the outbound trip, the second to manage the inbound trip. 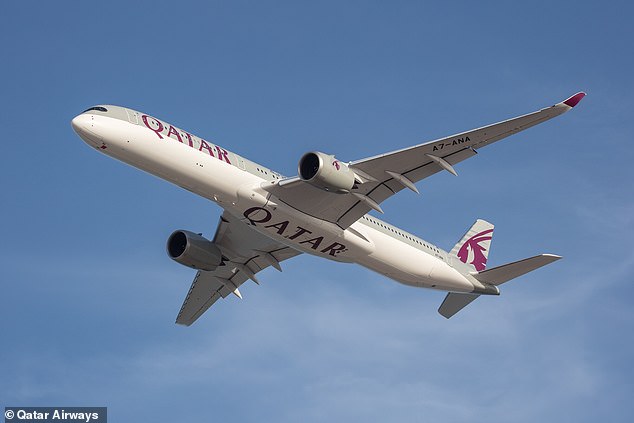 State-owned Qatar Airways is laying off 20 per cent of its workforce and has told employees cabin crew would be made redundant. It has been one of few airlines to continue regular, scheduled flights during the global lockdowns

For long-haul flights, crew members who have to stay overnight in a foreign city can only travel in Qatar Airways-approved transport and must stay in their rooms to limit human interactions.

The airline said: ‘Qatar Airways continues to implement the highest standards of health and safety. Its aircraft are regularly disinfected using cleaning products recommended by the International Air Transport Association (IATA) and the World Health Organisation. 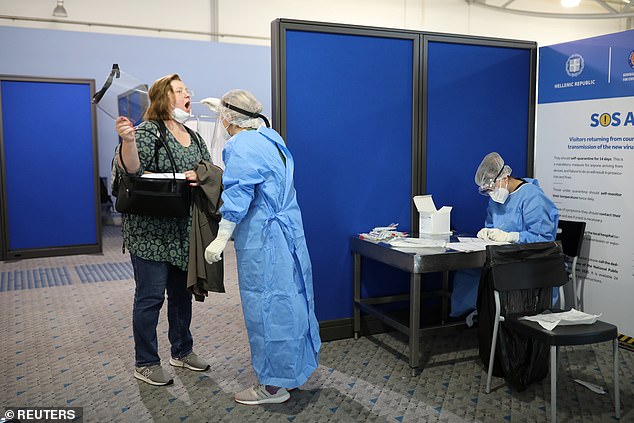 All flights to and from Qatar have now been suspended to prevent further infections being brought over from the country. Qatar has had 63,741 confirmed cases. File image

‘Qatar Airways’ aircraft feature the most advanced air filtration systems, equipped with industrial-size HEPA filters that remove 99.97 per cent of viral and bacterial contaminants from re-circulated air, providing the most effective protection against infection.

‘All the airline’s onboard linen and blankets are washed, dried and pressed at microbial lethal temperatures, while its headsets are removed of ear foams and rigorously sanitised after each flight. These items are then sealed into individual packaging by staff wearing hygienic disposable gloves.’

Qatar Airways Group Chief Executive, His Excellency Mr Akbar Al Baker, said: ‘At Qatar Airways, we have introduced these additional safety measures onboard our flights to ensure the continued health and wellbeing of our passengers and cabin crew, and to limit the spread of coronavirus.’

The IATA, the body representing global airlines, earlier this month came out in favour of passengers wearing masks onboard, as debate intensifies over how to get airlines flying while respecting social-distancing rules.

State-owned Qatar Airways is laying off 20 per cent of its workforce and has told employees cabin crew would be made redundant.

It has been one of few airlines to continue regular, scheduled flights during the global lockdowns to contain the novel coronavirus, maintaining services to around 30 destinations.

The airline said this month it would start resuming flights to destinations it had suspended due to the virus outbreak and that it aimed to fly to up to 80 destinations by June.