The Victorian government says its hotel quarantine program is ready to receive travellers returning from coronavirus-ravaged India as the first chartered repatriation flight prepares to land in Darwin on Saturday.

About 900 Australians in India who have been identified as vulnerable will be prioritised for the repatriation flights with one flight leaving every seven to nine days until the end of June, as agreed at national cabinet last week. 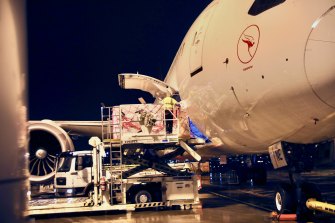 The first repatriation flight was due to return from New Delhi, India to Australia on Saturday.

The first official repatriation flight is not scheduled to land in Victoria until May 27, when 150 people from India will arrive in Melbourne and enter hotel quarantine. However, it is likely that the opening of “loophole” routes via third countries such as Qatar means Victoria will begin receiving people from India sooner, providing they can afford seats and can secure them.

This option is allowed by the expiry on Saturday of the biosecurity order that threatens hefty fines or jail time for people who enter Australia via a third country.

Victoria’s hotel quarantine system, which was paused in February after leakages of COVID-19 then rebooted in early April, had 18 active cases on Friday. 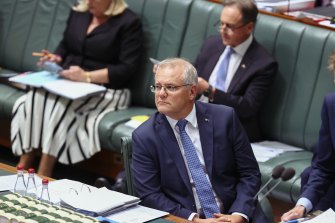 A state government spokeswoman said Victoria’s hotels were prepared to host arrivals from any country, including India where more than 350,000 cases of coronavirus are being recorded daily and the World Health Organisation has labelled a new strain “a variant of concern”.

Additional precautions will be applied to the arrivals on the May 27 repatriation flight, including minimising their exposure to other international arrivals at the airport, fast tracking check-ins and placing air purifiers in their rooms. They will only be taken to a “health hotel” if they are showing symptoms of COVID-19.

“We have followed expert and independent advice to ensure our quarantine system can protect against these highly infectious, rapidly changing variants of concern,” the spokeswoman said.

In a sign of the proliferation of COVID-19 in India, 42 of the 150 people set to board the first repatriation flight from New Delhi on Friday were denied entry because they had tested positive to the virus. A further 31 close contacts were also unable to fly home, leaving the Qantas flight almost half empty. 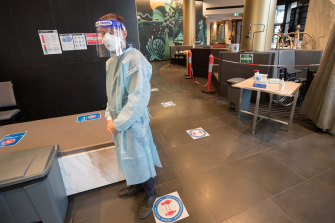 Victoria says its quarantine hotels are up to the task of housing travellers from any country.Credit:Jason South

A spokeswoman for the Prime Minister said the Department of Foreign Affairs and Trade was working to substitute other vulnerable Australians onto the flight but it would probably prove difficult because every passenger required a coronavirus test in advance.

Earlier this week a Melbourne resident tested positive for coronavirus after completing 14 days’ quarantine in an Adelaide hotel, where authorities suspect he was infected by air from a neighbouring room.

Professor Maximilian de Courten, director of Victoria University’s Mitchell Institute and a hotel quarantine expert, said there was no conclusive evidence that the variant first spotted in India was more infectious or posed a greater risk to hotel quarantine.

Current quarantine measures had in almost all cases stopped the British variant so far, he said.

“So far, the Indian strain does not seem to be a particular problem. But what happened in Adelaide shows a virus, no matter the strain, can escape. And the problem, which we are finally admitting officially, is the aerosol problem,” he said.

“It can be carried via air-conditioning, it can be blown across the corridor, it can affect people who have never had any physical contact.”

On the prospect of travellers from India travelling to Australia via a third country, the federal government spokeswoman said the Commonwealth would closely monitor the number of people who tested positive after returning from other countries and introduce further measures if needed.

It’s expected that from Saturday Australia will revert to its previous rules on those transiting through a third country, where every traveller must show a negative test result from the past 72 hours in order to board the flight.

The spokeswoman said the controversial pause on flights from India had worked because active cases of coronavirus in hotel quarantine across the country fell by more than 40 per cent in the past few weeks, down from 292 to 171. At Howard Springs, positive cases have dropped from 53 to 4.

About 9500 Australians have registered their interest in flying home from India with DFAT.

University of NSW epidemiologist Professor Mary-Louise McLaws, a COVID-19 adviser to the World Health Organisation, said she had great confidence in Howard Springs but little faith in the nation’s hotel quarantine systems.

“[Howard Springs] has been an exemplar not just in Australia but in the world, and for many reasons. They have set up multiple barriers to catch a highly infectious agent,” she said.

Professor McLaws said it was also essential that all staff at the facility had received two doses of vaccine before they came into contact with any returned passengers.