A potentially dangerous type of gas heater will be banned from being sold and installed in Victoria from Monday, as manufacturers and suppliers seek to delay the move to sell their remaining stock.

Energy Safe Victoria will ban open-flued gas space heaters without a mechanism to automatically shut down because of risks the heaters can cause carbon monoxide poisoning. 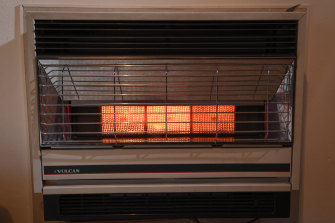 Open-flued space gas heater will be banned in Victoria if sold or installed without safety features.Credit:Justin McManus

The ban follows the 2017 death of Greensborough grandmother Sonia Sofianopoulos, who a Victorian coroner found was fatally poisoned by a Vulcan Heritage heater that had been manufactured about 25 years earlier.

The coroner warned in 2018 there were possibly tens of thousands of similar heaters in Victoria and recommended that Energy Safe Victoria work with the industry to phase out the heaters.

Suppliers and manufacturers agreed to remove heaters without the safety features from the market by June 30 this year, but say sales and installations fell during pandemic lockdowns, leaving them with thousands of unsold heaters.

Energy Safe commission chair Marnie Williams said the agency had heard industry objections, but the ban was in the best interest of community safety.

“These heaters are old technology and pose an unacceptable safety risk,” Williams said.

“Industry has been given time to adapt their supply lines to include the shutdown safety capability. It is time to draw a line in the sand and prohibit these heaters from sale to ensure their eventual phase out.”

Gas Appliance Manufacturers Association of Australia president Ross Jamieson said the ban had surprised the industry and would affect and retailers, installers and at least three manufacturers that had been unable to draw down their remaining stock.

Jamieson said the association was preparing to file a case with the Victorian Civil and Administrative Tribunal ahead of the ban, arguing it had been working toward a sensible exit for selling the heaters.

“At the eleventh hour to say, when there’s a couple of thousand appliances left and consumers with appliances waiting to be commissioned, [that] they’re now inherently dangerous, makes a farce of the whole process,” he said.

“The industry had moved away from the product already. These products are legacy products that are installed in locations where it’s not practice to install another product without significant structural changes.”

Energy Safe has led an awareness campaign highlighting safety risks of the heaters during the past five years. Jamieson denied heaters remained unsold because of the campaign.

The agency said it would also monitor online sales of new and second-hand heaters, audit manufacturers and inspect retail outlets.

Williams urged people with the heaters to ensure their units were serviced at least once every two years by qualified gas fitters.

“I’d also encourage people to replace their heater when possible. There are many alternative heating options that are cost-effective and more efficient,” she said.

Our Breaking News Alert will notify you of significant breaking news when it happens. Get it here.