Home » World News » Why DID we let millions into Britain unchecked, MPs ask

Why DID we let millions into Britain unchecked, MPs ask

Why DID we let millions into Britain unchecked, MPs ask as a major report says failure to impose quarantine was a grave mistake

Failure to impose quarantine measures at the border was a grave mistake that accelerated the virus spread, a major report by MPs says.

The cross-party inquiry is highly critical of the Government’s ‘inexplicable’ decision to lift its initial quarantine measures in mid-March, ten days before lockdown.

It concluded many more Britons were infected in the 12 weeks after that decision before compulsory self-isolation was re-introduced for international passengers on June 8.

However, it stopped short of saying lives had been lost as a result.

The failure was likely to have allowed ‘thousands’ of infectious travellers into Britain, it says. 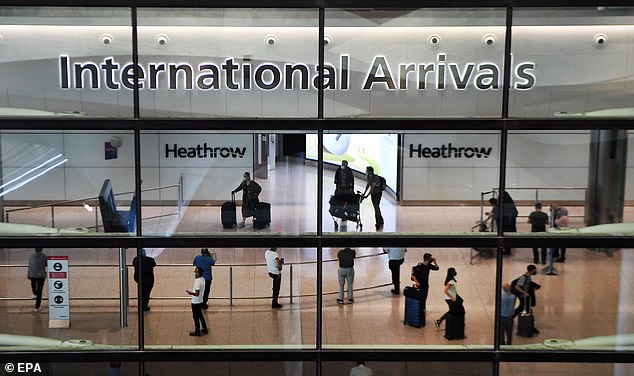 The cross-party inquiry is highly critical of the Government’s ‘inexplicable’ decision to lift its initial quarantine measures in mid-March, ten days before lockdown. Pictured, passengers arrive at Heathrow Airport in London on July 30

The home affairs select committee report, published today, says: ‘The decision to lift all Covid-19 related guidance for international arrivals on March 13, just as other countries were expanding their border measures, is inexplicable.

‘Evidence suggests that thousands of new infections resulted from cases arriving from Europe in the ten days between this decision and the introduction of lockdown on March 23.

‘The failure to have any special border measures during this period was a serious mistake that significantly increased both the pace and the scale of the epidemic in the UK.

‘Had stronger early measures been taken, we conclude that it is likely that the spread of the virus could have been slowed.’

MPs asked the Government nine times for scientific evidence behind the decision to end travel restrictions – but nothing was provided.

‘In such circumstances as these, the committee could quite reasonably conclude the advice we requested simply does not exist,’ it says.

Committee chairman Yvette Cooper added: ‘The Government’s failure to have proper quarantine measures in place in March as the infection was spreading fast was a grave error and meant Covid spread faster and reached more people. The UK was almost unique in having no border checks or quarantine arrangements at that time. 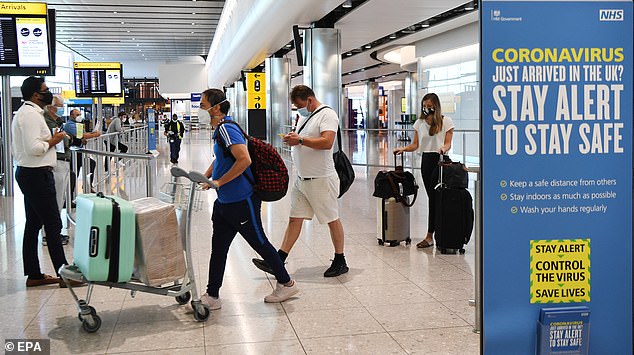 The failure was likely to have allowed ‘thousands’ of infectious travellers into Britain, it says. Pictured, passengers at Heathrow Airport on July 30

‘That alone should have rung loud alarm bells for ministers and made them think again.’ She added: ‘We are concerned that border measures just weren’t taken seriously enough at the beginning of the crisis.’

Re-introducing restrictions as virus flashpoints occur in countries like Spain is the right thing to do, she added. But she called for better communication by the Government to ensure families who have booked holidays are not left in the lurch.

Arrivals by air to the UK totalled 7 million in January, 6.8 million in February and 3.8 million in March before falling to just 112,000 in April, the report says.

The Government first issued quarantine rules on February 25 for travellers from Wuhan and Hubei province in China, Iran and parts of South Korea. Northern Italy was added to the list on March 8, and the whole of the country two days later.

For these ‘category 1’ countries, self-isolation was compulsory for 14 days and advisable for arrivals from other ‘category 2’ countries. 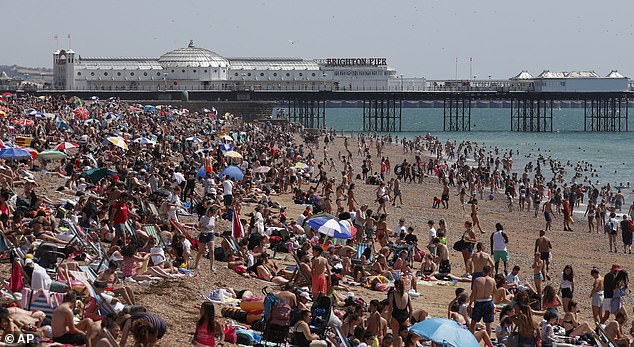 MPs asked the Government nine times for scientific evidence behind the decision to end travel restrictions – but nothing was provided. Pictured, beachgoers enjoy the sunshine in Brighton on July 31

The reports says: ‘Neither Spain nor France were ever added to either the category 1 or category 2 list.’

Academic studies later estimated the largest number of UK infections originated with arrivals from Spain – just over 33 per cent, followed by France with 28.5 per cent – peaking at an estimated 900 infectious people arriving here from abroad every day.

The report goes on: ‘Evidence shows it is highly likely uncontrolled importations of the virus from European countries contributed to the rapid increase in the spread in mid-March. The failure to properly consider stricter requirements on those arriving was a serious error.’

There was also a ‘lack of clarity’ over who was responsible for monitoring emerging infection threats from different countries, it adds.

The report concludes that border measures will have to remain in place for ‘some time to come’.