London: A woman who secretly swapped seven pebbles for £4.2 million ($7.94 million) worth of diamonds has been sent to prison for her role in the audacious heist at a luxury jewellery store in London’s Mayfair district.

Lulu Lakatos, 60, was sentenced on Wednesday to 5½ years in prison after a jury at Southwark Crown Court in London found her guilty of conspiracy to steal. 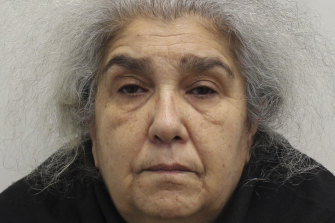 Lulu Lakatos ditched her disguise after the heist and boarded a high-speed Eurostar train to France.Credit:Metropolitan Police via AP

Lakatos was part of an international gang that fled to France after stealing the diamonds from Boodles on New Bond Street on March 10, 2016. The gems haven’t been recovered.

“This was an audacious theft, carried out in plain view of experienced and professional staff at a renowned jewellers,” Detective Sergeant William Man of London’s Metropolitan Police Service said in a statement.

“The meticulous planning and execution of this theft reveals to me that those involved were highly skilled criminals.”

In the days leading up to the heist, the criminals held a series of meetings with Boodles staff on the pretense that they represented a wealthy Russian investor who was looking to purchase gems, police said.

Lakatos, who was born in Romania and lived in France, posed as a gem expert named “Anna” who then went to Boodles to value seven diamonds for the buyer.

After she inspected the gems, which included a 20-carat heart-shaped diamond valued at more than £2.2 million, they were individually wrapped and placed in a locked bag that was supposed to be held in the jeweller’s vault until payment was received. But when Boodles’ own expert became suspicious the next day, the bag was X-rayed and the store discovered nothing but seven ordinary pebbles.

Lakatos had used a distraction to swap the bag containing the diamonds for an identical one containing the pebbles before it was locked in the vault, according to security camera video released by police.

After leaving the store, Lakatos handed the bag containing the diamonds to one of her female accomplices, before ditching the long coat, hat and scarf she wore as a disguise and boarding a high-speed Eurostar train to France.

She was arrested on a European arrest warrant last September and returned to Britain to stand trial.

Two men who worked with Lakatos previously pleaded guilty to conspiracy to steal and were sentenced to 3 years and eight months in prison. Police are still investigating the involvement of two other women.